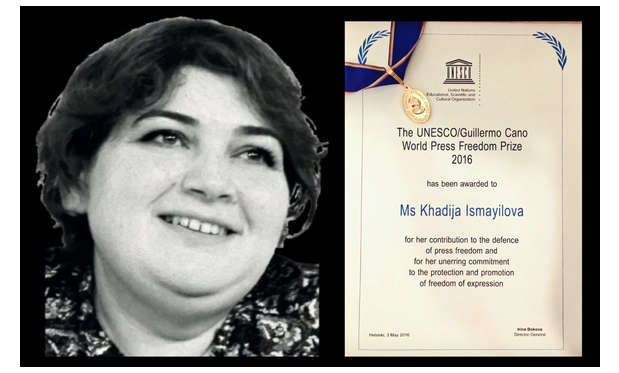 You have graciously and generously gathered tonight on the occasion of the award of the annual Guillermo Cano award for press freedom. If you don’t mind, I will take a minute to pay tribute to Mr. Cano, since the award is very much about him, a person, as much as it is about press freedom, a principle.

Guillermo Cano was killed on 17 December 1986 in front of his papers office. In all of his work, he emphasized / refused to compromise / sought justice.

As the recipient of the 2016 prize, I want to take this opportunity tonight, to present you with Mr. Cano’s career and accomplishments not as a cause for celebration, but as a call to action. His legacy remains profoundly incomplete. For all of us here tonight, there is much work that remains to be done.

Let me explain. Have you heard of Elmar Husseynov? He is Azerbaijan’s Guillermo Cano, and I believe his work and his sacrifice must be honored here tonight. Elmar was the editor of an independent human rights magazine called The Monitor, that was unique in its simple journalistic mission to tell the truth about domestic developments in Azerbaijan. Elmar was gunned down in front of his apartment on March 2, 2005. His wife and child were home when the shots were fired; there has been no investigation into his murder, no prosecution, no assignment of blame. His murder was one of the countless crimes against journalists that have met with impunity in Azerbaijan. As we memorialize Guillermo Cano, we must remember Elmar Husseynov, and their shared service to the truth must not be in vain.

And now me. As you know, I speak to you from my prison cell, on the occasion of an award I cannot claim. My crime? Investigative journalism – exposing corruption linked to Azeri President Ilham Aliyev and members of his family. My conviction? Seven and a half years in prison as the result of a trial in which there was no incriminating evidence nor a single witness who testified against me. I remain alive to fight for justice, unlike my colleague and dear friend Elmar; but it is a challenge I cannot accomplish on my own.

Which brings me to you. Humanity suffers when journalists are silenced. This is why some people believe that fatal attacks against journalists constitute a crime against humanity. As you gather here tonight, I ask you not to laud my work, or my courage, but to dedicate yourself to the work each one of you can do on behalf of press freedom and justice. You now have a relationship to Guillermo Cano, to Elmar Husseynov, and to me. We are all degraded and dehumanized by attacks on our fundamental rights, by contempt for justice, by disdain for fairness and denial of the truth. We, globally, brought together tonight to honor press freedom, must pledge to fight for it.

It is fitting that, UNESCO, the world’s protector of human civilization and achievement, has united us in this mission. So what does tonight’s call of action involve? For all of us – individuals, organizations, and states, it means:
– Stand up for the truth, and dare to ask questions and be critically minded.
– Accept no excuse for political prisoners. Societies cannot develop without scrutiny and public criticism. Dissent is not grounds for jail.
– Fight corruption and demand integrity and the rule of law from your governments and allies. Corruption is evil and profoundly degenerative. Don’t ignore it, or abet it.
– Expect no security without trust, and no meaningful strategic alliance with partners that hold international standards and commitments in contempt.
– Don’t be afraid. Your sacrifice is worth it.
I accept tonight’s award with humility, in view of the work and sacrifice that has preceded me and the work that remains to be done. Fight with me for freedom, and for truth.