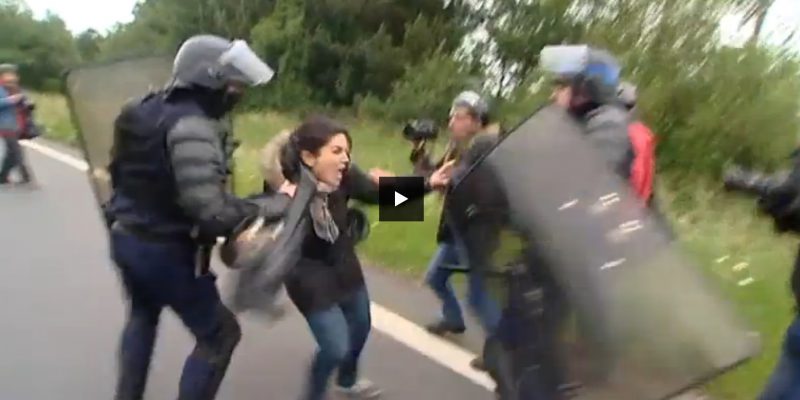 
On 3 June, the European and International Federations of Journalists (EFJ/IFJ) have submitted the rise of police violence towards journalists in France on the Council of Europe Platform for the protection of journalism and safety of journalists. The EFJ and the IFJ request explanations from French Minister of the Interior Bernard Cazeneuve.

The EFJ and the IFJ, as well as their French affiliates, SNJ, SNJ-CGT and CFDT-Journalistes have seen a worrying upsurge of policy violence towards journalists since mid-May on the fringe of the demonstrations against the new French labour law.

On 17 May in Paris, cameraman Joël Labat was targeted by a tear-gas grenade fired by police.

On 26 May in Paris, freelance photographer had a serious head injury caused by a grenade thrown at the end of the demonstration.

On 31 May in Rennes, a photographer was forced by the police to delete his images.

On 2 June in Rennes, police forces beat with a baton three journalists, Vincent Feuray, freelance photographer, Jérémie Verchère, photojournalist and Bruno Van Wassenhove, cameraman for the public TV channel France 3 and damaged their material. A reporter from the private channel M6 was also knocked to the ground. These journalists were clearly identifiable with press cards, helmet and camera with logos. They said they were set upon intentionally by the police.

“Nothing can justify this violence and intimidation, said EFJ President Mogens Blicher Bjerregård. We want Minister Cazeneuve to give explanations, to punish those responsible for violence and to put police forces back into line. These behaviors are simply not compatible with the rule of law.”