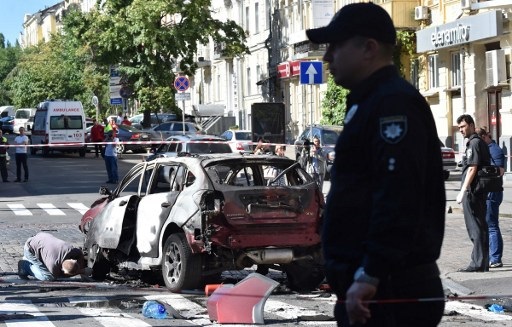 Pavel Sheremet, who worked for the Ukrainskaya Pravda newspaper and radio Vesti died when the car he was driving exploded shortly after it started, according to the Ukrainian Prosecutor’s Office. He was heading to the radio’s office to host his morning show.

Some reports claim the car belonged to his employer, Alyona Pritula, the founder and chief editor of Ukrainskaya Pravda. The media company was founded in 2000 by Pritula and Georgy Gongadze, who was assassinated on September 17, 2000 (his crime remains unpunished).

The explosion occurred at about 7:45 am, after Sheremet got into the car, started the engine and drove a short distance. He was killed instantly. According to Russian newspaper Novaya Gazeta, Pavel Sheremet and Alyona Pritula had complained of being followed.

An official with Ukraine’s interior ministry, Anton Gerashchenko, said in a statement on Facebook that the explosion was caused by a “car bomb.” He said the incident was a “cynical and well-premeditated murder.”

IFJ President Philippe Leruth said: “This is a contemptible murder. The authorities must now act swiftly and efficiently to bring the killers to justice. There can be no more impunity for the killing of journalists. Our thoughts go out to the family and friends of Pavel and to all journalists in the region. We will do everything we can to ensure this senseless killing does not go unpunished.”

EFJ President Mogens Blicher Bjerregård added: “Pavel Sheremet was an award-winning journalist and a crusader for media freedom. His assassination reminds us that the safety situation for journalists in Ukraine is still a major concern. We call on Ukrainian authorities to guarantee freedom of expression and of the press in the country.”

Sheremet was a prominent journalist and a political analyst specializing in relations between Russia and Ukraine, as well as developments in former Soviet republics. Over the last five years, Sheremet lived and worked in Ukraine.

He had been critical of authorities in Belarus, Russia and Ukraine in his articles and broadcast pieces.

He started his career in Belarus, where he was imprisoned after covering corruption in the government of President Aleksander Lukashenko.