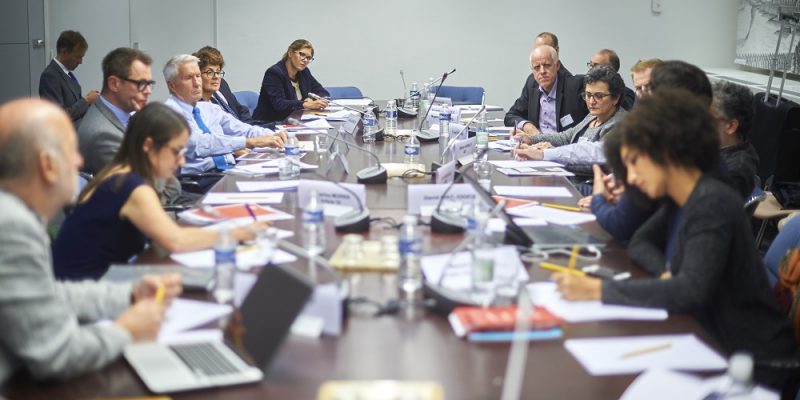 
The presidents of the European and International Federations of Journalists (EFJ-IFJ) and the representatives of the other partner organisations of the Council of Europe Platform for the Safety of Journalists met with the Council of Europe´s Secretary General, Thorbjørn Jagland, yesterday, in Strasbourg, to discuss the possible follow up to the media freedom alerts published on the Platform with regard to Turkey in the aftermath of the 15 July failed coup. The Secretary General briefed them on the Council of Europe actions so far and on-going co-operation with Turkey, as a member state of the organisation.

Since the coup attempt, the partners of the Platform submitted 19 alerts regarding media freedom violations in Turkey. Those cases raise serious questions about respect for the rule of law, even taking into account Turkey’s decision to derogate from some of the articles of the European Convention on Human Rights, under the state of emergency. The media freedom violations we reported on the Platform cast very serious doubts on the legal validity of the derogation.

Turkey has, by far, the highest number of alerts on the Platform: 80 out of 217 alerts concern Turkey (37%) and most of these alerts are of the highest level of gravity (detentions, arrests, closure of media outlets…). “It is very clear that media freedom is rapidly deteriorating in Turkey. The situation requires a coordinated action of the partners of the Platform together with the Council of Europe”, said EFJ President Mogens Blicher Bjerregård.

“To set free the 92 journalists in jail in Turkey is a priority for us, said IFJ President Philippe Leruth, but we must also ensure prosecuted journalists have the right to a fair trial”.

“We are also very concerned by the situation of the 2,500 journalists who became unemployed in the wake of the coup attempt, following the closure of newspapers and the withdrawal of licences for TV and radio channels,” added EFJ GS Ricardo Gutiérrez.

The partner organisations of the Platform agreed on several priority actions, including organising visits to journalists in prison and sending observers to journalists’ trials.

After the meeting, Secretary General Jagland said: “We have had a good exchange. The partners have expressed their concern with the situation in Turkey, but confirmed their support for the Platform as an opportunity for constructive dialogue on media threats. We will continue this dialogue”.