How media can help to build democracy? Three initiatives for social change 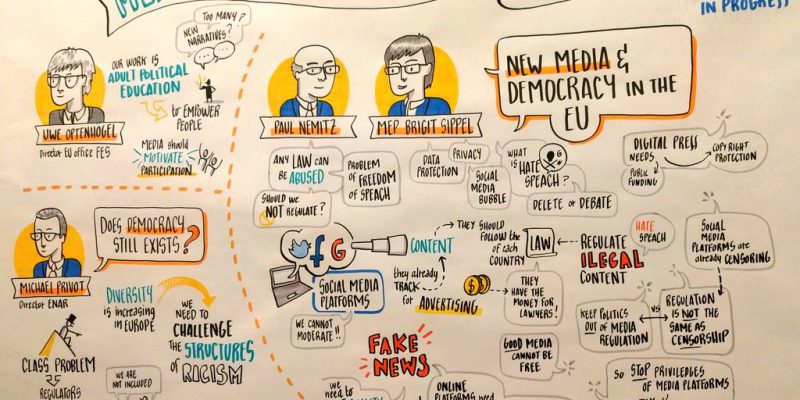 
The European Network Against Racism (ENAR) and Friedrich-Ebert-Stiftung (FES) EU Office organised yesterday (26/04/2017) a meeting about media and its role for democracy in Europe. The international experts presented new initiatives for social change and talked about how media can help to build democracy and how to deal with hate speech, racism and lack of diversity in European newsrooms.

“The misconception that news should be free is a great danger to democracy. News and journalists who write the news must be paid,” stressed Birgit Sippel, German member of the European Parliament. “If the media only relies on the advertiser’s funds, that might influence their content,” she added and emphasised the importance of dialogue with the audience, media literacy and law enforcement to combat hate speech.

Paul Nemitz, European Commission, DG Justice and Consumers drew the meeting’s attention to the great threat of Facebook, Google acting as monopolies with revenues of 80% of all advertisement. He supported the German “draft law to improve law enforcement in social networks”, see EFJ Press Release.

Renate Schroeder, EFJ, stressed the importance of self-regulation and law enforcement of existing policy including against hate speech. She outlined the EFJ’s project on “Media against Hate” addressing new forms of journalism, such as data journalism in the context of migration. She stressed the importance of cross-border journalism, innovation and digital skills that have created some excellent journalistic work. “However without investment (private and public), all this is not possible,” she said.

Chadi Bahouth presented a project, called the Neue Deutsche Medienmacher (New German Media Professionals), which takes journalists who come to Germany as refugees and trains them for a year. They get mentors from the German media landscape who have the ability to open doors for them and organize their internships. “The journalists come from Syria or Iraq, which means they were usually working in a system where they couldn’t speak openly. They can finally express themselves critically in Germany and the experience is very liberating for them,” said Bahouth.

Jallow Momodou talked about a Swedish platform Eye witness, which people can use to record and share instances of racism and hate crimes that they might endure in their everyday lives and in the media. They can file a complaint or videotape what they are experiencing either as a victim or as a witness. Their data is confidential. The platform was created because the hate crimes in Sweden were increasing, but the police and law enforcement were unable to prosecute them.

Professor Nadia Fadil from the University of Leuven emphasized the importance of Islam today and how the media is a crucial infrastructure when talking about it. A lot of the times the discussions about Islam have headlines announcing the dramatic Islamisation of Europe, she outlined. “It is one of the ways you get the highest audiences, because it is full of drama, there is sex, there is helplessness,” she said and added that we shouldn’t underestimate the impact those media’s representations have not only on public discourse but also in everyday interactions.