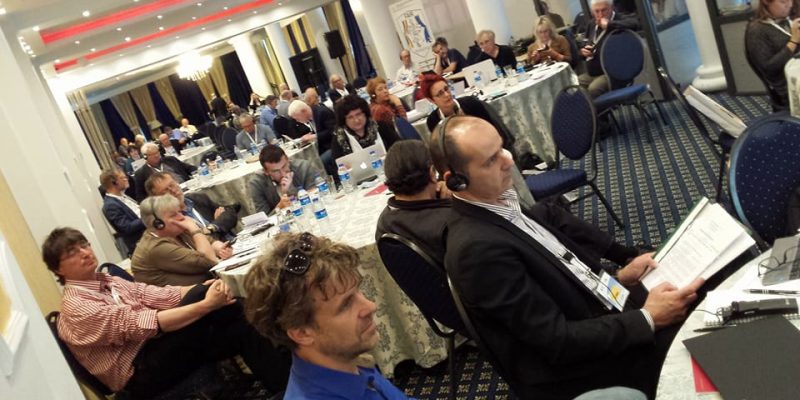 
Media freedom in Europe has reached a ”critical turning point” due to dramatic challenges faced by journalists, highlighted Patrick Penninckx, the Head of the Council of Europe Information Society Department in his key note speech at the EFJ Annual Meeting  on 18–19 May in Bucharest, Romania.

Around 70 delegates and guests from 30 European countries attended the meeting entitled ‘Journalist under pressure’ and debated about key challenges facing journalists and their unions. The meeting, hosted by the EFJ affiliate in Romania, FAIR MediaSind, pointed out the lack of social dialogue in the media in Romania to guarantee decent working conditions for journalists and media workers.

EFJ President Mogens Blicher Bjerregård spoke at the opening of the meeting about the increasing dangers facing journalists. Three journalists in Europe were killed since the last General Meeting of the EFJ in April 2016.  The meeting held a minute of silence to commemorate all journalists who scarified their lives for the profession.

According to the latest study on intimidation of journalists presented by Mr. Penninckx, there has been a surge of unwarranted interference, fear and consequent self-censorship. He pointed out that journalists are increasingly exposed to threats, violence and imprisonment. Marilyn Clark, associate Professor at the Department of Psychology at the University of Malta, who led the research gave a presentation about the study as well.

The media, including the internet, is progressively restricted by national security concerns and unprecedented concentration of ownership hinders diversity and independence. The alarming situation was shown by the number of media violation cases submitted by the EFJ and IFJ and other civil society organisations. ”Since the introduction of the Council of Europe Platform to protect journalists  two years ago, the NGOs have submitted 292 alerts of which the 255 alerts come from or are co-signed by EFJ,” said Blicher Bjerregård in the meeting.

Mr Penninckx invited the EFJ to play a vital role in defending human rights in Europe which are under severe attack. He stressed that the EFJ is a key partner of the Council of Europe in its work to protect journalists and media freedom and media standards, notably through participation in the platform for the protection of journalism and safety of journalists and other initiatives.

The Annual Meeting debated many issues such as digital journalism, media concentration, journalists’ authors’ rights, the alarming situation in Turkey, atypical and freelance journalists and media freedom. A series of resolutions and statements were adopted.