#HesaMag debate: Today’s and the future of journalism is precarious 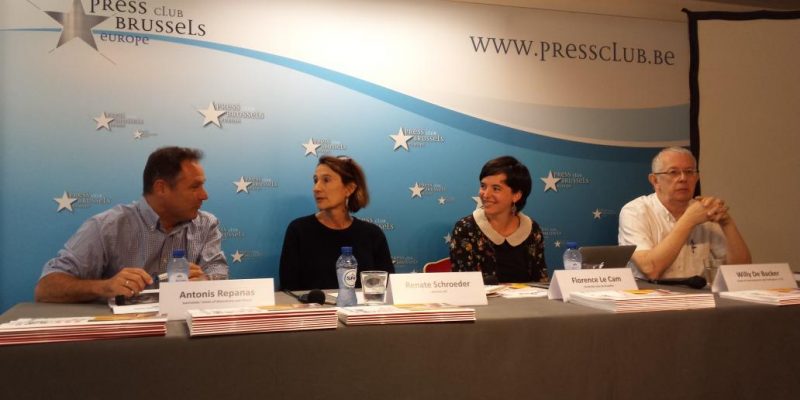 
Multitasking in a 24-hour rush, selling articles for five or ten euros and the increase of burnouts is a reality for too many journalists nowadays. This decline in working conditions is also the main topic of the latest issue of HesaMag, titled “Journalism, an increasingly precarious profession”. The European Trade Union Institute (ETUI) organised yesterday (26/07/2017) a debate on the subject and presented the magazine, which was carried out in collaboration with the European Federation of Journalists (EFJ). The debate was moderated by Willy De Backer, Head of Communication and Publications at the ETUI.

Renate Schroeder, the EFJ’s director, shed light on the deteriorating working conditions of journalists, which has visible effects not just on their work and motivation, but on the society as well: “People are not trusting media anymore. They get fed up with the ‘fast-produced’ stories, which journalists have to produce under pressure.” Addressing the dramatic level of precariousness ever more journalists face, she  welcomed a recent initiative of the European Commission, the European Pillar of Social Rights that refers to the right for collective bargaining for all workers independent of their employment conditions and social protection schemes for all including self-employed workers. She also raised the awareness about safety of journalists, namely expressed concern that this year six journalists had been killed in Europe.

Under such precarious working conditions it is hard to keep going, said Antonis Repanas, journalist and member of the Journalists’ Union of Macedonia and Thrace (ESIEMTH – Greece). “But in the end, the rough way is the right way,” he added. Repanas was laid off from one of the biggest Greek newspapers TA NEA where he worked as a sports journalist. He decided to go to Idomeni, where the refugee crisis was at high point and to write “human stories” – first on his Facebook profile and then for international media. “People actually read them, started commenting and I got the strength to continue. When the thunder hit, I created a windmill,” he said.

“Human stories” are the future of journalism in his opinion. The real problem with all journalists getting unemployed in Greece is that they don’t believe in journalism anymore. “For newspapers to be successful, they need to be useful. For that to be possible, they should be left to journalists to have complete control over them, which is not happening,” he added. Mainstream media are mostly being directed by marketing and communications specialists who try to “sell” instead of doing quality journalism.

Florence Le Cam, head of journalism department at the Université Libre de Bruxelles (ULB) talked about the education of young journalists, who despite having great profiles as multitasking and multi-skilled potential workers, face harsh competition in the labor market. “The teachers should teach students long-form journalism, so they can learn how to distinguish themselves. But they should especially teach them how to be also entrepreneurs besides freelancers,” she stressed.

Renate Schroeder drew the debate’s attention to the unions’ role to also offer courses about entrepreneurship and work more with universities to show journalists how to resist the situation. According to her, journalists have to be their own publishers, but she also stressed the importance of public media funding. “We have to be optimistic, but also need to prepare young journalists for what’s ahead,” all panelists concluded.