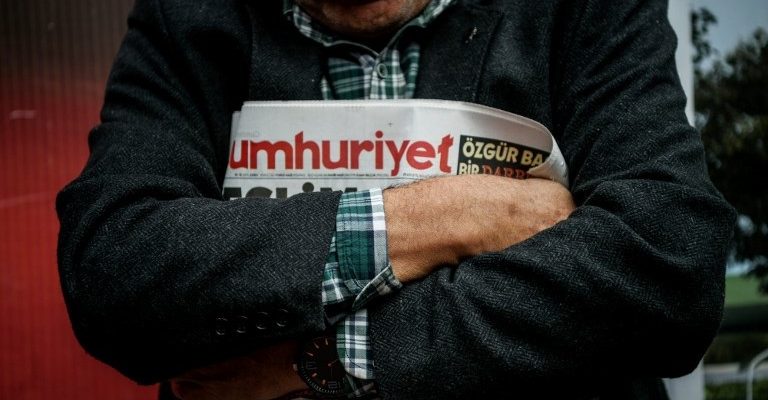 
The trial involving 17 journalists and executives of Turkish newspaper Cumhuriyet will start on Monday 24 July at 9:00am in Istanbul’s Çağlayan Justice Palace. The trial is expected to continue until Thursday 28 July. The International and European Federation of Journalists (IFJ and EFJ) join their affiliates TGS and DISK Basin-Is  in condemning the trial which is based on unfounded accusations that the paper is secretly supporting the PKK – a militant Kurdish organisation and FETO, the group allegedly responsible for last year’s failed coup.

EFJ president Mogens Blicher Bjerregård will be present at the trial on behalf of both IFJ and EFJ to monitor the proceedings and express solidarity with the accused.

They are charged with “helping an armed terrorist organisation while not being a member” and “employment-related abuse of trust”. The government maintains that since 2013, the newspaper has acted as “defender and protector” of FETO and the PKK. This is despite Cumhuriyet’s long history of criticism towards these groups.

These charges carry up to 43 year sentences.

“Today freedom of the press is under grave threat. Journalism itself has been put on trial in the Cumhuriyet case”, said Ozge Yurttas, general secretary of DISK Basin-Is. “We demand freedom for all journalists. Freedom of expression and the press are core principles of democracy.  We can no longer claim to be living in a democratic country unless these innocent journalists are set free.”

The 17 employees have also effectively been punished without conviction, having already spent months in pre-trial detention.

The charges are based solely on journalists’ tweets and news reports, rather than any concrete evidence which has led press freedom supportive organisations to regard the prosecution as politically motivated.

Since president Erdogan’s election to the presidency in 2014, the country has experienced a rapid descent towards authoritarianism, most noticeably after April’s constitutional referendum which among other amendments abolished the post of prime minister and replaced the parliamentary system with a presidential one, granting the executive much wider ranging powers.

Last year’s failed coup saw president Erdogan and his ruling Justice and Democratic Party (AKP) begin a nationwide crackdown on dissent, including the dismissal of over 100,000 civil servants, the forced closure of hundreds of media outlets and civil society groups and the jailing of 164 journalists.

Turkey is now the world’s leading jailor of journalists.

“The EFJ and IFJ see these charges for what they are, blatant persecution of an independent and critical newspaper and its employees,” said IFJ President Philippe Leruth.  “Cumhuriyet is one of the largest and oldest newspapers in Turkey with a long and distinguished history of editorial independence and advocacy for free expression.  It is evident to us and the international community that the Turkish government is once again criminalizing journalistic work and attempting to silence one of the only remaining major opposition voices in the country. We demand the immediate release of the Cumhuriyet employees, as well as all other journalists jailed for exercising their right to free expression.”