Cumhuriyet trial in Turkey: “This case is about criminalizing journalism” 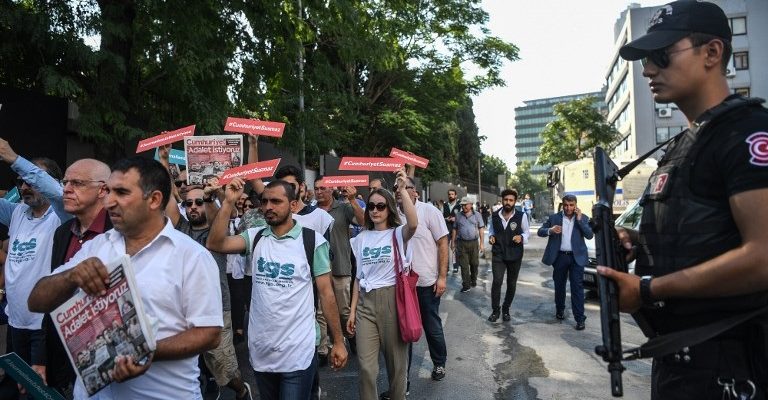 
The president of the European Federation of Journalists Mogens Blicher Bjerregård is attending today in Istanbul the opening of the trial of 17 journalists and executives at Turkish opposition newspaper Cumhuriyet.  “Journalism is not a crime,” chanted several hundred people gathered outside the central Istanbul court to protest against the prosecution of journalists, executives and lawyers of Cumhuriyet.

“You can really feel the solidarity present in the courtroom,” said Mogens Blicher Bjerregård. “Let’s hope for justice.”

On the behalf of the international support group attending the trial, Steven M. Ellis, from the International Press Institute, delivered the following statement, in front of the court:

“Representatives from international free expression groups and professional organizations are here today to observe proceedings in this trial and send a message of solidarity – to the journalists on trial, to their families and colleagues, and to all journalists in Turkey.

We are also here to send a message to Turkey’s government: the world is watching. And attempts, like this case, to trample on human rights, to silence criticism, to stifle dissent and avoid accountability, will be neither ignored nor accepted.

This trial will decide far more than the fate of 17 Cumhuriyet journalists and executives. It will show whether journalism and human rights, and the rule of law – even democracy itself – have a place in this “new Turkey”.

They must. A free, stable and prosperous Turkey depends on it. 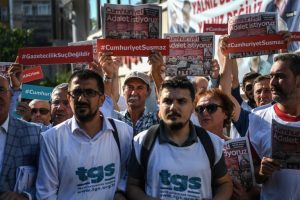