The European Parliament urges the Commission to protect whistleblowers 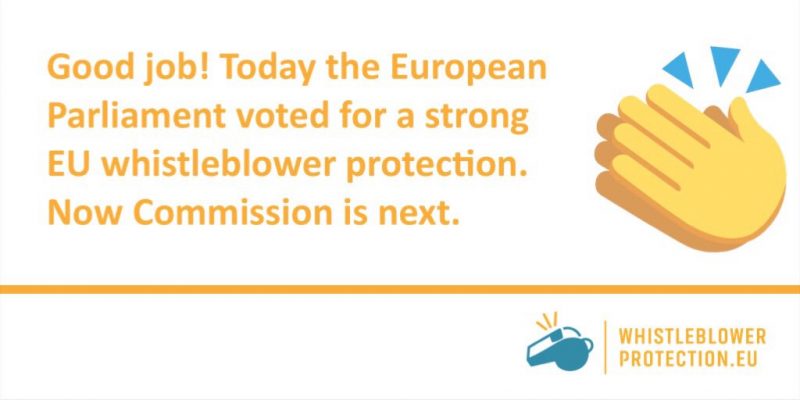 A total of 666 MEPs took part in the vote: 399 (60%) voted in favour of the report, 101 (15%) voted against and 166 (25%) abstained from voting. Proposed by Virginie Rozière (S&D), the report demands an EU-wide protection for whistleblowers, including a protection for whistleblowers who have no other possibility but going directly public (to a journalist or a media) to disclose an information of public interest. There was a risk that some MEPs may backtrack on this key request when adopting the report. In the end, only some minor paragraphs have been rejected.

The vote took place shortly after the minute of silence in memory of Maltese journalist Daphne Caruana Galizia killed in a car bomb on Monday 16 October.

Together with its partners (the European Broadcasting Union, Eurocadres, Transparency International, ETUC, EPSU…), the EFJ is now asking the European Commission to turn words into action and to propose a directive as soon as possible:

“This is the least the Commission can do following the public consultation which received more than 5.500 responses – a huge majority is in favour of an EU-wide legislation; the petition signed by more than 80.000 citizens and 80 organisations; and now the adoption of this report. There is a momentum that no one, in particular the Commission, can ignore”, says EFJ General secretary Ricardo Gutiérrez.

Here is the list of 101 MEPs who voted against EU-wide #whistleblower protection.
And 166 who abstained.#EPlenary pic.twitter.com/XQ7krY209u

And here is the list of 399 MEPs (60%) who voted today in favour of EU-wide #whistleblower protection. Thank you! pic.twitter.com/CFvrsDpvyO