The EU is finalising the directive for protecting whistleblowers 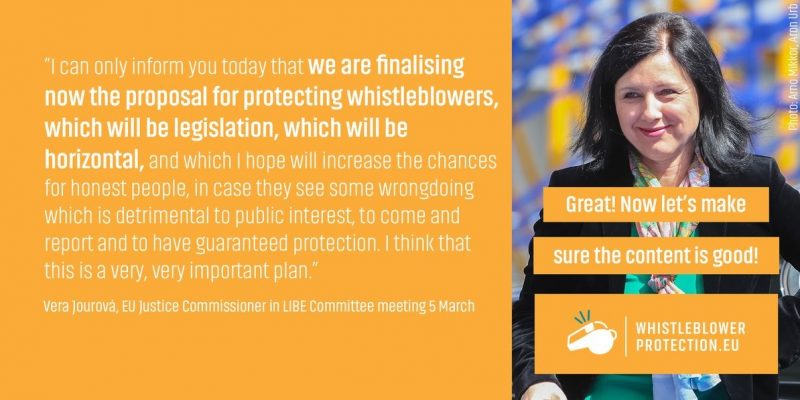 Speaking of the recent killing of investigative journalist Jan Kuciak in Slovakia, Vera Jourová, EU Commissioner for Justice, Consumers and Gender Equity, said on 5th March, in EU LIBE Committee, that she considers the rule of law as one of the things that really matter.

If Kuciak’s case is not dealt with satisfactorily, she said, then it would provide additional support for the establishment by 2020 of a European Public Prosecutor’s Office (EPPO), which could try cases such as financial crime, including fraud and corruption, in the EU.

And she continued, “We have to be good in establishing the rule of law, we have to be good in establishing the EPPO, and we have to be much better in protecting honest people, including the journalists, but also whistleblowers, and I can only inform you today that we are finalising now the proposal for protecting whistleblowers, which will be legislation, which will be horizontal, and which I hope will increase the chances for honest people, in case they see some wrongdoing which is detrimental to public interest, to come and report and to have guaranteed protection. I think that this is a very, very important plan.”

The EFJ welcomes this announcement. “We need to make sure the European Commission will publish the directive as soon as possible,” said EFJ General Secretary Ricardo Gutiérrez. “Together with our partners within the whistleblowerprotection.eu platform, we also need to make sure the content of the directive will provide an EU-wide legislation on whistleblower protection with a broad scope of groups and areas of activities protected.”