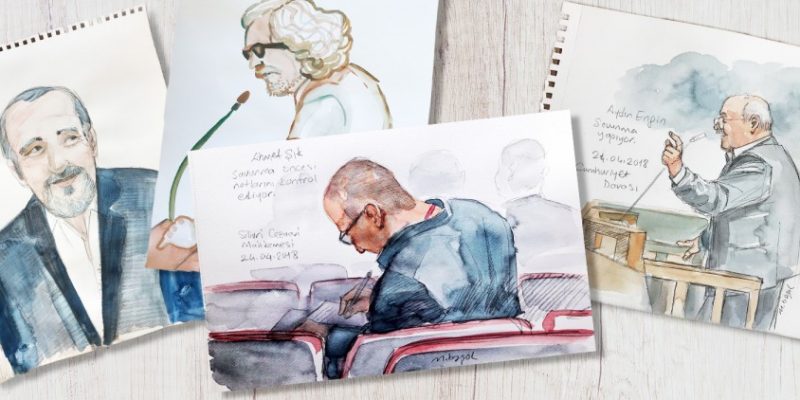 
Joint Statement on the Cumhuriyet trial: 28 media freedom and freedom of expression organisations call on the institutions of the Council of Europe and its member states to remind Turkey of its international obligation to respect and protect human rights.

We, the undersigned freedom of expression and human rights organisations, strongly condemn last night’s guilty verdicts for staff and journalists of Cumhuriyet newspaper and note the harsh sentences for the defendants. The verdict further demonstrates that Turkey’s justice system and the rule of law is failing: this was a trial where the ‘crime’ was journalism and the only ‘evidence’ was journalistic activities.

While three Cumhuriyet staff were acquitted, all the remaining journalists and executives were handed sentences of between 2 years, 6 months and 8 years, 1 month. Time already served in pretrial detention will likely be taken into consideration, however all will still have jail terms to serve, and those with the harshest sentences would still have to serve approximately 5 years. Travel bans have been placed on all defendants, barring the three that were acquitted, in a further attempt to silence them in the international arena.

Several of our organisations have been present to monitor and record the proceedings since the first hearing in July 2017. The political nature of the trial was clear from the outset and continued throughout the trial. The initial indictment charged the defendants with a mixture of terrorism and employment related offenses. However, the evidence presented did not stand the test of proof beyond reasonable doubt of internationally recognizable crimes. The prosecution presented alleged changes to the editorial policy of the paper and the content of articles as ‘evidence’ of support for armed terrorist groups. Furthermore, despite 17 months of proceedings, no credible evidence was produced by the prosecution during the trial.

The indictment, the pre-trial detention and the trial proceedings violated the human rights of the defendants, including the right to freedom of expression, the right to liberty and security and the right to a fair trial. Furthermore, the symbolic nature of this trial against Turkey’s most prominent opposition newspaper undoubtedly has a chilling effect on the right to free expression much more broadly in Turkey and restricts the rights of the population to access information and diverse views.

“We observed violations of the right to a fair trial throughout the hearings. Despite the defence lawyers arguing that the basic requirements for a fair trial, such as an evidence-based indictment, were lacking these arbitrary sentences were handed down in order to attempt to intimidate one of the last remaining bastions of the independent press in Turkey,” said Turkey Advocacy Coordinator, Caroline Stockford.

The defence team repeatedly relied on the rights enshrined in the Turkish Constitution, as well as the case law of the European Court of Human Rights, demonstrating the importance of European human rights law to Turkey’s domestic legal system.

“‘Journalism is not a crime’ was declared again and again by the defendants and their lawyers and yet, despite the accusations containing no element of crime, the defendants served a collective total of 9.5 years in pretrial detention, and were found guilty at the end of an unfair trial,” said Jennifer Clement, President of PEN International.

Speedy rulings on legal cases of Turkish journalists, which include the Cumhuriyet cases of Murat Sabuncu and others and staff writer Ahmet Şık cases, pending before the European Court of Human Rights (ECtHR) are crucial. This is not only to redress the rights violations of the many journalists still languishing in detention, but also to defend the independence and impartiality of the judiciary itself in Turkey. The Cumhuriyet case and other prominent trials against journalists clearly demonstrate that the rule of law is totally compromised in Turkey then there is little hope for fair or speedy domestic judicial recourse for any defendant.

“The short three hours of deliberation by the judicial panel did not give the impression that the case was taken seriously. The 17 months during which there have been 7 hearings of this utterly groundless trial have damaged independent journalism in Turkey at a time when over 90% of the media is under the sway of the administration,” said Nora Wehofsits, Advocacy Officer, European Centre for Press and Media Freedom (ECPMF).

The guilty verdicts against the Cumhuriyet journalists and executives must be overturned and the persecution of all other journalists and others facing criminal charges merely for doing their job and peacefully exercising their right to freedom of expression must be stopped. The authorities must immediately lift the state of emergency and return to the rule of law. The independence of the Turkish courts must be reinstated, enabling it to act as a check on the government, and hold it accountable for the serious human rights violations it has committed and continues to commit.

In light of the apparent breakdown of the rule of law and the fact that Turkish courts are evidently unable to deliver justice, we also call on the ECtHR to fulfil its role as the ultimate guardian of human rights in Europe, and to rule swiftly on the free expression cases currently pending before it and provide an effective remedy for the severe human rights violations taking place in Turkey.

Furthermore, we call on the institutions of the Council of Europe and its member states to remind Turkey of its international obligation to respect and protect human rights, in particular the right to freedom of expression and the right to a fair trial, and to give appropriate priority to these issues in their relations with Turkey, both in bilateral and multilateral forums. In addition, the Council of Europe’s member states should provide adequate support to the ECtHR.

We also call on the European and International media to continue to support their Turkish colleagues and to give space to dissenting voices who are repressed in Turkey.