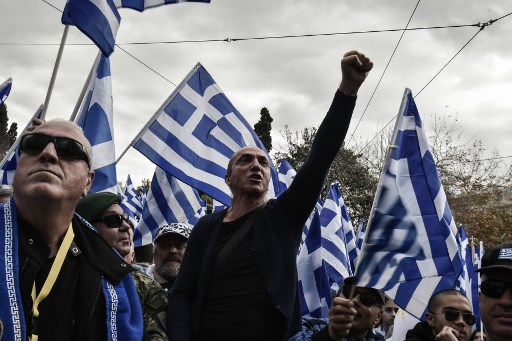 
On 20 January 2019, German journalist Thomas Jacobi, Greek photojournalist Kostis Ntantamis, as well as a cameraman for the public broadcaster ERT, have been attacked by members of the Greek neo-Nazi party Golden Dawn in Athens. The three journalists were covering a protest held outside the parliament building on Syntagma Square about the renaming of North Macedonia.

Journalist Thomas Iacobi, co-author of our documentary, was attacked in Athens today, while on the job, by a group of fascists, who identified him and called out to him: "You! you made that documentary on Golden Dawn!"
[Audio from the attack (Greek): https://t.co/OrDsJyMDEt]

In one incident, a group of far-right demonstrators punched Thomas Jacobi in the face after they recognised him for his previous work on Golden Dawn, the 2015 documentary “Golden Dawn: A Personal Affair. What’s in the mind of the neo-nazi next door?” According to a statement issued by the Foreign Press Association of Greece, they “caused him facial injuries and destroyed his equipment while demanding that he erase material gathered on his mobile phone”.

According to the daily Kathimerini, in an audio recording of the incident, the assailants can be heard repeatedly asking Jacobi if he was the one who authored that film. On another part of the square, unidentified demonstrators assaulted photojournalist Kostis Ntantamis, who sustained a serious head injury. Some of his equipment was stolen.

The European Federation of Journalists (EFJ) joins the Greek journalists’ organisations in strongly condemning these ultra-violent attacks on journalists.