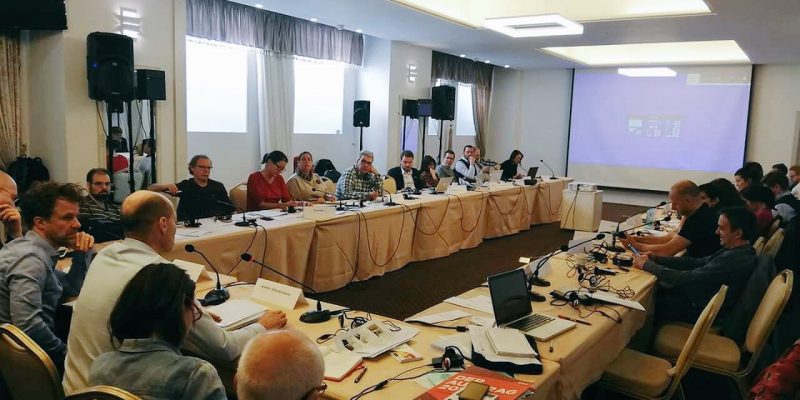 
Around 40 journalists and journalists’ representatives from 24 European countries attended the workshop on “Modernising public service media (PSM) through innovation and dialogue” on 4 and 5 March in Bucharest. Co-organised by the European Federation of Journalists (EFJ) and the Romanian trade union FAIR – Media Sind, and with support of the European Broadcasting Union (EBU) the workshop addressed the challenge for public service media to adapt to the changing way of consuming and creating news and media.

Studies show that the young generation is watching less and less television, and even less public TV channels. It partly explains why public service media started to diversify its content and medium. Gurdip Banghoo from the BBC Academy explained how the British public broadcaster is trying to be more and more audience-oriented with short, bite-sized, authentic format, such as BBC Stories. The issue of technology and big tech platforms was raised as a concern by most participants. Are they an opportunity to find meaningful way to dialogue with audiences or are they simply replacing journalists? Gurdip outlined several training offers reminding that “fundamentally it is all about good story-telling”.  Conclusions showed that unions together with PSM should take part in the debate. Good practice came from Finland where unions and management have experienced constructive dialogue making sure that journalists’ multi-tasking is limited as to reduced stress and burn-outs.

The fast-changing environment in the media sector results in a need for training of journalists, in order to gain the technical skills required for such new ways of telling stories. How to film with your mobile phone, finance your journalistic work or make a Facebook live, are some of the trainings proposed by the AJPro, the training scheme of the Belgian professional journalists’ association (AJP). Journalists’ organisations and public broadcasters should keep investing in new skills: “it is important to make the training offer attractive involving low costs for the journalists and a special attention should be paid to well address the needs. In the  long run, it increases the work satisfaction”, said François Ryckmans from the AJP. Journalists’ organisations should not shy away asking for public support for such training, he stressed. Mouloud Aïssou (SNJ-CGT) presented the collective agreement on training negotiated at France Télévision.

Reaching out to new audiences also means giving the floor to everybody. Barometers show that white upper-class men are overrepresented in the media, especially as experts. On the contrary, interviewees with a foreign ethnical background are more represented in vox pops than in expert positions. “There is a representation deficit of minorities and women, said Safia Kessas, in charge of diversity at the RTBF. It is important that journalists become aware of their biases”. Justyna Kurczabinska, head of the European Broadcasting Union News Exchange, added that across Europe there are more female journalists in lifestyle topics than in politics. According to the panelists, improving the gender and social imbalances will have an impact on the quality of the news. “The journalists have a social responsibility”, Kessas reminded. Cristiana Jankovics, explained the results achieved thanks to the “equal opportunities plan” at the Austrian broadcaster ORF.

A special focus on Romania highlighted the very critical situation of the Romanian public broadcaster TVR. Lack of social dialogue, disrespect for its employees and the union, disregard of journalistic and deontological standards up to censorship and other challenges were outlined by  Monica Ghiurco, member of the Board of Directors of the Romanian Television Society. Elsewhere in Europe, attacks against public service media were discussed by Konrad Mitschka from ORF, Jonas Jungar from YLE, Finland, Eugen Freund, Austrian member of the European Parliament and Urs Thalmann, Impressum, Switzerland.  The successful campaign against the “No-Billag” initiative in Switzerland, the need to deliver quality and alliances; “radical transparency” about editorial choices and the constant fight for financial stability are main items highlighted.

Ensuring editorial independence has always been a challenge for public service media. Per Arne Kalbakk, head of editorial ethics & standards of the Norwegian public media, NRK, outlined his role as a shield between management and journalists guaranteeing independence, reaching out to the audience and creating trust in journalism. To fight the attacks by populists and nationalists, Sandro Calderon, journalist at Belgian broadcaster RTBF, advocated for more transparency, audience engagement, and protection of journalists to do their job better outlining the tools the RTBF together with the journalists’ association has developed.

EFJ President Mogens Blicher Bjerregard thanked all participants for their valuable and active participation in this successful workshop covering issues of great importance to journalism in a changing world.

The workshop is part of a series of events for EFJ affiliate dealing with key issues about managing change in the media. The project is financially supported by the European Union.

Working documents of the workshop

Per Arne Kalbakk – Editorial independence and ethics in the NRK