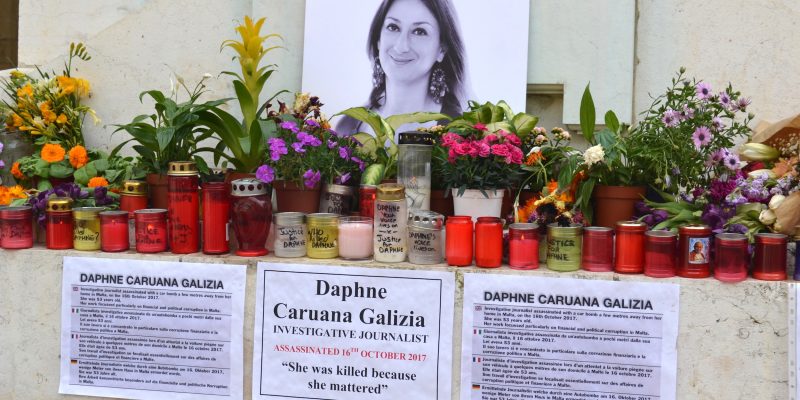 We, the undersigned international freedom of expression and journalists’ organisations, welcome the resolution of the Parliamentary Assembly of the Council of Europe (PACE) adopted on 26 June, condemning the continued impunity for the assassination of journalist Daphne Caruana Galizia and broader systemic rule of law shortcomings in Malta, and inter alia, calling for the launch of an independent public inquiry within three months.

Titled Daphne Caruana Galizia’s assassination and the rule of law in Malta and beyond: ensuring that the whole truth emerges, the resolution accompanied a report drafted by Dutch MP Pieter Omtzigt in his capacity as the PACE Special Rapporteur tasked with looking into the case.

After a robust debate in which only two delegates from Malta and four delegates from Azerbaijan spoke against the report, the resolution passed in a vote of 72 in favour, 18 against, and three abstentions. Most of the 14 amendments considered were rejected, including those from the Maltese delegation that would have undermined the resolution, as well as an amendment calling for PACE country monitoring to be opened on Malta.

The undersigned organisations have been united in calling for an immediate independent public inquiry to be launched since undertaking a joint international freedom of expression mission to Malta in October 2018 to mark one year since Caruana Galizia’s assassination – a measure also advocated by the Caruana Galizia family and their legal representation, which the Maltese government has so far resisted.

In line with a legal opinion drafted by Doughty Street Chambers and Bhatt Murphy Solicitors, an independent public inquiry would aim to establish whether the Maltese government knew or ought to have known of a threat to Caruana Galizia’s life; whether they could have acted to protect her and prevent her assassination; and what lessons can be drawn for the future.

We call for the government of Malta to immediately launch an independent public inquiry and to fulfil all recommendations of the PACE resolution; to cease efforts to discredit and lobby against Pieter Omtzigt and instead cooperate with him in the context of his mandate; and to ensure full compliance with all of Malta’s obligations as a Council of Europe member state, under the European Convention on Human Rights.

Representatives of Reporters Without Borders (RSF), the European Centre for Press and Media Freedom and IFEX were present at the PACE session, where they advocated support for the report and resolution and organised a side event on the same topic, also supported by ARTICLE 19, the Committee to Protect Journalists, the European Federation of Journalists and PEN International, with financial support from the Justice for Journalists Foundation.