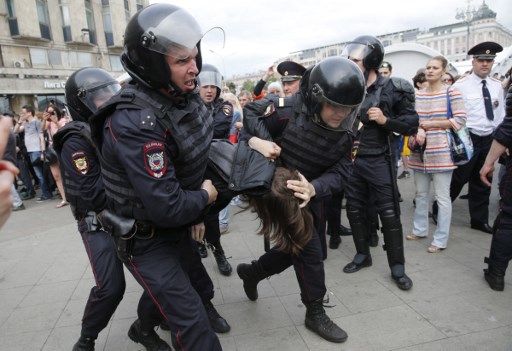 
On 03 August, Moscow’s police has detained at least ten journalists covering a rally organized by opposition groups. Continuing the protest of 27 July, about 1500 people had gathered in the capital of Russia in order to demonstrate for fair elections to the city council. The European Federation of Jounalists (EFJ) and its affiliate, the Russian Federation of Journalists (RUJ), strongly condemn this violation of press freedom and demands the Russian authorities to respect the journalist’s right to report.

According to Moscow police, about 600 people were arrested during the riots. Among these, there were at least twelve journalists and photographers, as RUJ reported:

According to the Journalists and Media Workers Union, two other journalists were detained:

Several of these journalists were detained despite the fact that they presented their press cards. All of them were  released immediately after they were brought to a police department.

The police used batons to beat those who attended the protests in order to crackdown the riots. In contrast to the demonstrations on 27 July, there were no registered cases of violence against journalists. Still, the police was very rude in conduct: According to the Russian Journalists and Media Workers Union, Dozhd correspondent Vladimir Romensky had his press card ripped off. Furthermore, the correspondents of the Media Zone Dmitry Shvets and Olga Romashova were pressured to sign a “warning” before the demonstrations started. UVD-Info photographer Aleksandre Medvedev was threatened to delete pictures showing a policeman’s face.

Protest were triggered after Moscow’s electoral authorities had rejected several opposition candidates from running in the elections to the city council. On Saturday 27 July, 3500 people attended a demonstration ending in a violent police crackdown, in which 1300 protesters were detained.  At least five journalists were injured and four arrested. EU foreign affairs chief Federica Mogherini criticized Moscow authorities through her spokesperson Maja Kocijancic, saying the detentions “seriously undermine the fundamental freedoms of expression, association and assembly.”