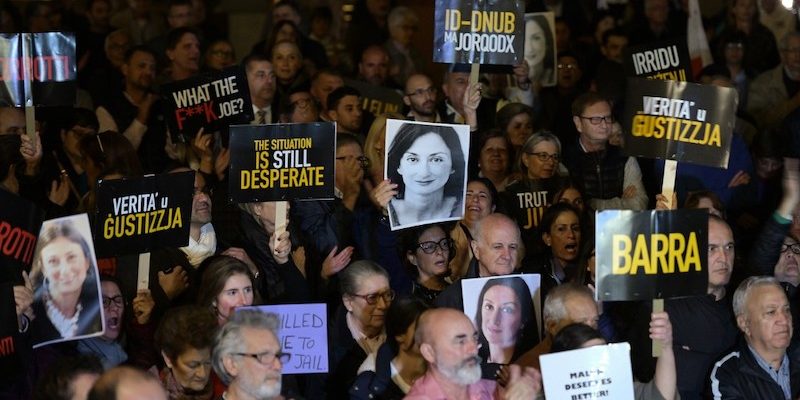 Prominent businessman Yorgen Fenech was arrested on 20 November in connection with investigations into the murder of Maltese journalist Daphne Caruana Galizia. Fenech was aboard a yacht, apparently trying to leave the country. Maltese prime minister, Joseph Muscat, described Fenech as a “person of interest” in the case and said there was nothing pointing towards the involvement of members of his administration in the murder. He was released on bail on Thursday evening.

Daphne Caruana Galizia’s family welcomed the arrest, saying it was “overdue” and added: “we now expect the authorities to continue investigating the links our mother uncovered between Fenech and the prime minister’s chief of staff and minister Konrad Mizzi”:

Confirmed: Yorgen Fenech was on the boat and tried to escape Malta. This is the man whose role was to remit bribe payments to Muscat’s chief of staff. Who is still his chief of staff. https://t.co/2sMbu6lzMO

On the same day, protesters gathered outside Malta’s parliament following this arrest and demanded the resignation of Prime Minister Joseph Muscat.

Daphne Caruana Galizia was known for her work in exposing corruption. She was killed by a car bomb near Valletta, the capital of Malta, in October 2017, a murder that shocked Europe and raised questions about the rule of law on the country. Before her death, she wrote about a mysterious company called 17 Black Limited linked to Maltese politicians, and a Reuters investigation last year revealed that Fenech was the owner of that corporation.