“Assange, Snowden, Manning and Harrison are the resistance fighters of the 21st century” 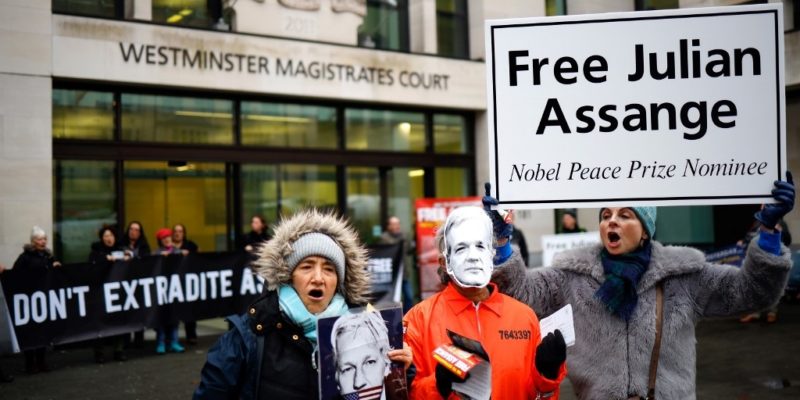 
Citizens, journalists, artists, human rights organisations and journalists’ unions gathered on January 29th in Brussels to call on the Belgian government to do its utmost to protect Julian Assange and impede his extradition to the United States.

The International and European Federations of Journalists (IFJ and EFJ) joined the two Belgian civil society organisations, Carta Academica and Belgium4Assange, in two public actions organised in Brussels to defend freedom of expression, freedom of the press and our right to know in general, and Julian Assange, Chelsea Manning, Sarah Harrison and Edward Snowden in particular.

Over 120 personalities, artists, activists and journalists and a dozen organisations, including the International and European Federations of Journalists (IFJ and EFJ), signed a joint petition to the Belgian authorities to urge action on Julian Assange’s case. The text asks the Belgian government to recognise Julian Assange as a political prisoner, send observers to his trial, grant him international protection and do its utmost to impede his extradition to the US.

“This text calls on the Belgian government to recognise Julian Assange as a political prisoner, to send observers to his trial, to grant him international protection and to do everything possible to prevent his extradition to the United States,” said Vincent Engel, representative of Carta Academica, at the Palais des Académies.

The event also served as a ceremony to grant an Academic Honoris Causa title to four whistleblowers for their contributions to citizens’ right to know by denouncing crimes and state secrets. This honorary title was granted to Chelsea Manning, Edward Snowden, Sarah Harisson and Julian Assange, whose father, John Shipton received it on his behalf.

“We are receiving lots of support from all over the world, also in Europe. Recently, the Council of Europe voted unanimously against Julian’s extradition and calling for his immediate release. All these actions are very important. Thank you all for all the efforts you are doing, especially to the IFJ”, John Shipton said after receiving the title.

IFJ General Secretary, Anthony Bellanger, also sent an official request to the Commune of Brussels –the local council of the city- to provide Julian Assange with the Brussels’ honorary citizenship. The request was rapidly accepted by its mayor.

“I solemnly asked today the commune of Brussels and its mayor to recognise Julian Assange as an honorary citizen of Brussels. Assange’s father, John Shipton, said he will be delighted to come to the Grand Place, in the heart of Europe, to receive the title on behalf of Julian. I am at the disposal of the Mayor of Brussels to organise everything”, said Anthony Bellanger.

“I am very happy today to celebrate with you these modern-day heroes who have sacrificed themselves to defend the citizens’ right to know,” said Edwy Plenel, founder and president of Mediapart.

“Julian Assange, Edward Snowden, Chelsea Manning and Sarah Harrisson are the resistance fighters of the 21st century. They sacrificed their freedom and lives for telling the truth,” added Anthony Bellanger, standing on the fourth chair of Davide Dormino’s sculpture, “Anything to say”, at Place de la Monnaie in Brussels, renamed Place Julian-Assange for the occasion.