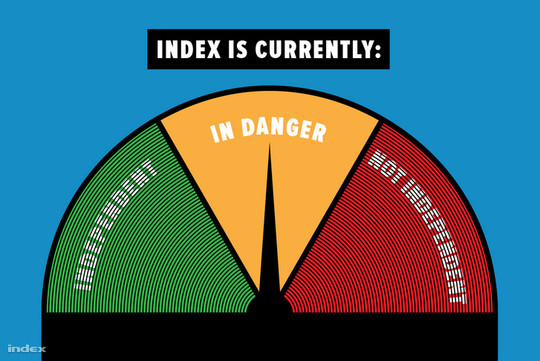 Independent news website Index.hu has told its readers that the site’s staff and the whole newsroom were in danger due to “external pressures”. The International and European Federation of Journalists (IFJ and EFJ) stand in solidarity with Index.hu workers and urges the Hungarian authorities to guarantee the freedom of information and media plurality in the country.

Editor-in-chief of Index.hu, one of the few surviving independent news websites in Hungary, Szabolcs Dull, released a statement on 21 June warning that the website’s freedom was being jeopardised by an “organisational overhaul”.

“We are concerned that with the proposed organisational overhaul, we will lose those values that made Index.hu the biggest and most-read news site in Hungary”, Dull said, without giving further details.

Just after, Szabolcs Dull’s board membership was terminated. He remains editor-in-chief.

Index is part of a short list of independent outlets operating in Hungary and whose finances and freedom to work have been curtailed by Prime Minister Viktor Orban’s growing efforts to control Hungary’s media.

From the very beginning of his presidency, Orbán has been trying to control Hungary’s media by silencing independent voices – like outlets Nepszabadsag and Heti Valasz – and taking control of media organizations.

“The situation is complex, it is difficult to see clearly. Index.hu has long been under government pressure. The ad-spaces are sold by a quasi-government sales house. Some of the owners are close to pro-government media. Now the autonomous and intact operation of the editorial office has become questionable, as an external consultant has proposed to outsource sections of it,” said Miklós Hargitai, president of the Association of Hungarian Journalists and chairman of the Hungarian Press Union.

The media crackdown escalated in March 2020, when in the context of the Covid-19 pandemic, the Hungarian Parliament passed a bill allowing the government to rule by decree without a set time limit. Under this law, people who spread so-called misinformation will face up to five years jail terms.

The IFJ and EFJ have repeatedly called on the European Union institutions to condemn the Hungarian government media crackdown and to take urgent action to guarantee media freedom and plurality in the country.