Stop use of SLAPPs: EFJ joins coalition to express concern about legal threats against EUobserver 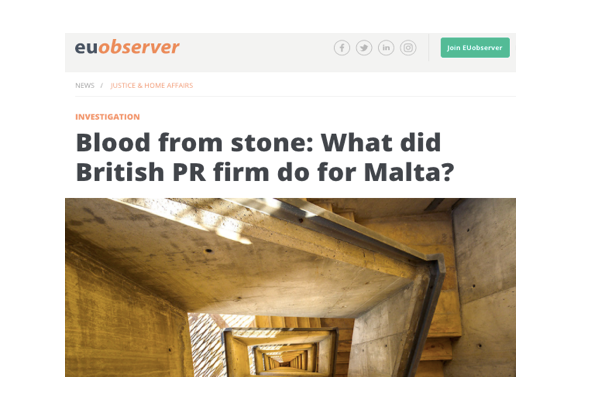 Credits: screenshot of the EUobserver article


Media Freedom Rapid Response (MFRR) partners, journalist bodies, free expression and journalist support organisations are concerned about the legal threats made against EUobserver in Luxembourg and Belgium and call to stop the use of Strategic Lawsuits Against Public Participation (SLAPP) actions across Europe. Left unreformed, such legal threats will be sufficient to silence media workers and outlets. We stand in solidarity with EUobserver and will continue to monitor developments around the case.

In 2019, EUobserver published an article in the English language investigating the actions of a British PR firm, Chelgate, on behalf of the Maltese state. According to the investigation, Maltese authorities hired Chelgate to defend the image of the former prime minister of Malta, Joseph Muscat, in EU capitals during the investigation into the murder of Daphne Caruana Galizia. Part of its work was to defend Muscat in a UK inquiry into “fake news”. But EUobserver said Chelgate also hired a private intelligence firm in Luxembourg called Sandstone to compile a report on Daphne Caruana Galizia’s killing. Excerpts of Sandstone’s research, obtained by EUobserver, contained accusations that Russian president Vladimir Putin and Azerbaijan president Ilham Aliyev had conspired to murder Caruana Galizia, using a Chechen assassin. Chelgate, and its associates also briefed targeted European media about Daphne Caruana Galizia, promoting these and similar conspiracy theories about her, EUobserver said.

This article brought about a number of responses from Sandstone, including a legal letter sent to EUobserver asking them to publish journalistic sources and documentation. While EUobserver offered the right to reply and a number of changes, Sandstone did not agree and in May 2020 it was reported that Sandstone had filed both civil and criminal charges before Luxembourg authorities against EUobserver based on the original article. On 7 May 2020, the local prosecutor dismissed the case arguing that it should be filed before civil courts. Sandstone missed a three-month deadline to file a civil defamation lawsuit before Luxembourg’s civil court. A few days later it was reported that Sandstone plans to bring another action against EUobserver in Belgium.

The use of vexatious litigation against journalists is not isolated to Luxembourg, Belgium, EUobserver or Sandstone. Over the last few years, a number of similar egregious cases have been documented. There has been a clear increase in legal threats and judicial harassment across Europe: The use of SLAPPs to target and restrict journalists and media workers, exerts a significant pressure on media freedom, enabling powerful and wealthy litigants to stifle legitimate criticism through the abuse of existing laws, most notably, defamation.

Further, 119 civil society organisations have already asked the European Commission to undertake concrete legislative and other measures to end gag lawsuits in Europe, including an Anti-SLAPP directive. These are practical and necessary changes that can be brought forward to protect media freedom across Europe. As demonstrated in the passage of the Whistleblowing directive, the European Commission can take the initiative to protect the rule of law and free expression.

Left unreformed, legal threats such as this will be sufficient for journalists, media workers and outlets to step back from covering sensitive but necessary topics. Coupled with diminished access to legal representation, we are facing a significant threat to the overall media landscape and with it a less empowered citizenry and weakened rule of law across the European Union. As the first European Union Rule of Law report is due in the Autumn of 2020, we cannot ignore the impact of these lawsuits and change is long overdue.

We, the undersigned, express our solidarity with EUobserver, call on the pursuers to stop the use of SLAPP actions, and urge the European Commission to act definitively to protect media freedom across Europe.