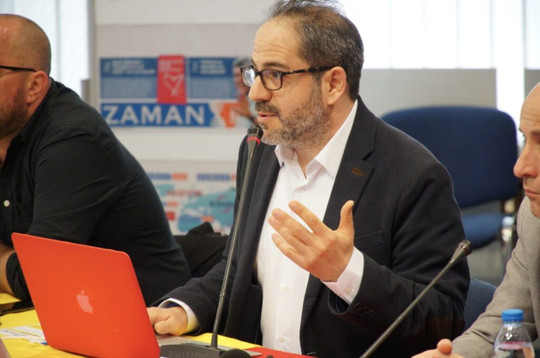 A Turkish court has requested on 9 March the extradition of a Turkish journalist who is living in exile in Sweden for allegedly insulting two officers of the court in 2018. The news of the request to extradite Levent Kenez from Sweden was reported by nordicmonitor.com on 28 June. European and International Federations of journalists (EFJ/IFJ) join the Swedish Union of Journalists (SJ) in calling on Swedish authorities to deny the extradition request.

Levent Kenez is accused of defaming a prosecutor and a judge in an article published on the Turkish-language news website TR724 on 17 February 2018, following the court’s decision to hand down aggravated life sentences to six journalists and media workers on trumped-up charges of attempting “to destroy the constitutional order.”

Kenez works as an editor for the Nordic Monitor, a website that provides news on security, diplomacy, intelligence and military matters with a special focus on religious, ideological and ethnic extremist movements in Turkey. He also works as a columnist at tr724.com, a Turkish news site based in Brussels. He is the former editor-in-chief of the Meydan daily, which was shut down by the government in 2016.

The journalist fled Turkey in 2016 to escape persecution. He has been living in Sweden with his family ever since and was granted a refugee status that will expire in November 2020.

Ulrika Hyllert, President of the Swedish Union of Journalists said: “It is not the first time Turkey has asked Sweden to extradite a journalist. Sweden must defend press freedom in these cases. If Sweden agreed to these kinds of demands, it would be a shame for Sweden and our tradition of defending freedom of expression.”

IFJ General Secretary Anthony Bellanger said: “Turkey’s tracking down dissidents all over Europe must cease immediately. By asking Sweden to extradite Leven Kenez, Turkey is again trying to silence critical voices abroad. We urge Sweden to ignore this extradition demand and provide Levent Kenez with all the necessary security so that he and his family can live safely in Sweden without fear of being persecuted by Turkish authorities. ”