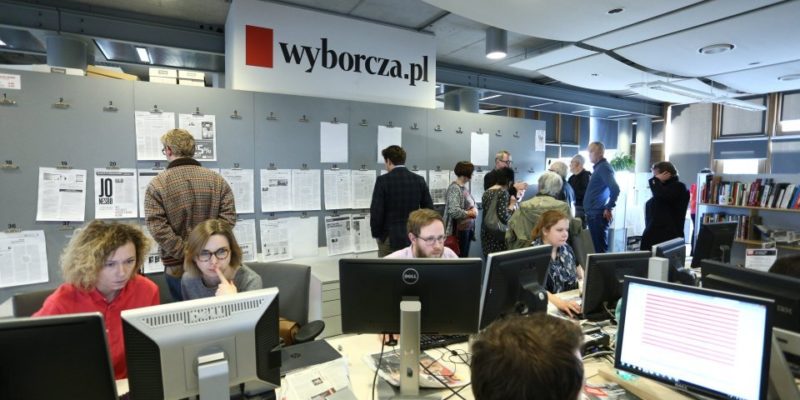 
The Media Freedom Rapid Response (MFRR), a mechanism to monitor and respond to threats against journalists and media workers in EU Member States and Candidate Countries, has responded to the unprecedented legal threats made against Polish newspaper, Gazeta Wyborcza by contributing €15,000, it’s largest grant to date, to support the outlet’s legal defence. The European Federation of Journalists (EFJ), a MFRR partner, backs grant toward legal defence of newspaper.

Since 2015, Gazeta Wyborcza has received over 55 legal threats, including civil defamation actions and alleged infringement of personal interests by a number of actors including Jarosław Kaczyński, the head of the governing Prawo i Sprawiedliwość (PiS) party; the state television broadcaster, Telewizja Polska SA and state owned company KGHM Polska Miedź SA. Each threat is in relation to articles published in the newspaper or on the outlet’s website. These include: coverage of a recent reprivatisation scandal in Warsaw; the quality of COVID-19 facemasks bought from China; alleged censorship of a music festival; and a business relationship between the PiS leader and an Austrian businessman in relation to the construction of a skyscraper for a company associated with the ruling party. These actions have targeted the newspaper itself, the paper’s publisher, Agora SA, the editor-in-chief of wyborcza.pl, Dorota Goluch, and individual journalists including Wojciech Czuchnowski, Iwona Szpala-Żak and Agnieszka Kublik.

Gazeta Wyborcza’s publisher, Jerzy Wójcik: “In countries that have become illiberal democracies, like Poland, independent media offer hope that civil society can survive. Our articles and journalistic investigations go against the interests of the ruling camp. Currently, Gazeta Wyborcza deals with dozens of lawsuits brought by the governing party, state owned companies and politicians belonging to the ruling camp. It is only thanks to the tireless efforts of our lawyers, and the institutions that support us, that we are able to continue our mission and operate as a dynamic, independent media outlet.”

These numerous legal actions pose an existential threat to Gazeta Wyborcza, an independent newspaper, which has made its name holding the powerful to account, informing the public and challenging opaque power and influence. What is more, the impact of these actions extends far beyond this one outlet alone. This can have a chilling effect for critical journalism as other outlets may see the threats made against Gazeta Wyborcza and decide to avoid sensitive but important public interest topics to ensure they do not meet the same fate as the second largest newspaper in Poland.

We call on the pursuers to stop the legal threats, which fit the definition of Strategic Lawsuits Against Public Participation (SLAPPs) and are aimed at stifling legitimate criticism and independent journalism. SLAPPs are a threat to the EU legal order, and in particular a threat to democracy and fundamental rights.

Since 2014, there have been over 490 alerts related to defamation actions uploaded to the Mapping Media Freedom platform, Cases such as those in Croatia, France, Malta, Luxembourg, Belgium, Romania and many more demonstrate the impact SLAPP suits have on media freedom, as outlets are threatened with costly and time-intensive actions. The number does not include the cases of journalists, media workers and outlets who have modified their coverage or decided against publishing something altogether to avoid legal threats. In this manner, the impact of defamation is hard to quantify but demonstrates a significant issue that needs to be addressed across Europe.

“Lawsuits and legal threats against Gazeta Wyborcza demonstrate once more how laws are being abused to intimidate and censor the media. This is why it is urgent to put in place Anti-SLAPP measures at European level that would discourage politicians and powerful corporations from filing vexatious lawsuits against journalists and the media. The legal support offered by MFRR will contribute to the costs of legal representation for both the outlet and journalists targeted in these actions and will ensure they are afforded the necessary expertise and experience to make their case and defend themselves against these actions that threaten press freedom for everyone in Poland.”

Cases of defamation, or civil lawsuits such as SLAPPs, can be reported to mappingmediafreedom.org. The Media Freedom Rapid Response (MFRR) also provides financial, practical and legal support for journalists, media workers and media outlets. For further information on legal aid please visit https://www.mfrr.eu/support/legal-support or contact our legal team on legal@ecpmf.eu