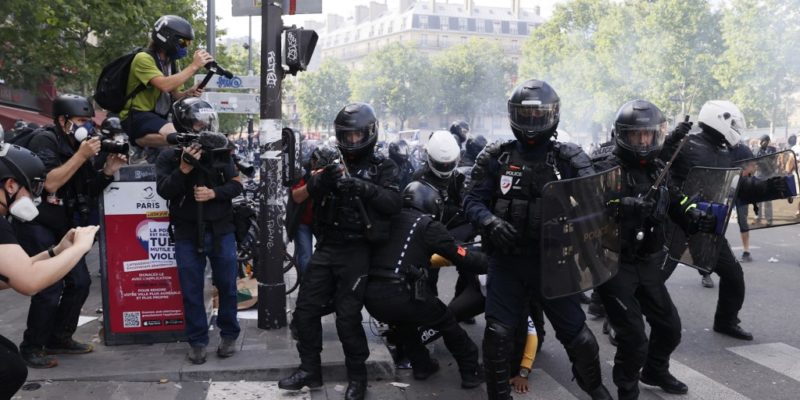 
A new UNESCO report highlights a sharp increase in the global number of protests during which the police and security forces violated media freedom in the first half of 2020, including in Europe. The annual report of the Council of Europe Platform for the Protection of Journalism drew the same conclusions in April, reporting numerous cases of violence in France, United Kingdom, Spain, Turkey, Albania, Azerbaijan and Russia.

UNESCO’s new report, Safety of Journalists Covering Protests – Preserving Freedom of the Press During Times of Civil Unrest, points to a wider upward trend in the use of unlawful force by police and security forces over the last five years. In 2015, journalists covering 15 protests worldwide were impeded by the police and security forces. By 2019, that number more than doubled to 32. The report suggests that a troubling new threshold has been crossed, revealing a significant and growing threat to media freedom and freedom of access to information in all regions of the world, including Europe.

The report also found that ten journalists were killed while covering protests over the last five years. Among them: Lyra McKee, fatally shot during rioting in the Creggan area of Derry (Northern Ireland), on 18 April 2019.

“Journalists have a critical role in reporting and informing audiences on protest movements. For many years, UNESCO has been raising global awareness to ensure that they can do this safely and without fear of persecution, and training security forces and the judiciary on international norms in freedom of expression. The figures in this report show that much greater efforts are needed. We call on the international community and all relevant authorities to ensure that these fundamental rights are upheld,” said Audrey Azoulay, UNESCO Director-General.

The report details the different abuses journalists face when covering protests including surveillance, harassment, intimidation, beating, being shot at with lethal or non-lethal ammunition, detention, abduction and the deliberate destruction of equipment.

The report points out the use of “flash ball” guns (LBD40) by French policemen. In France, “several journalists were injured, including Boris Kharlamoff, a journalist for the audio press agency A2PRL, who said he was hit in the side even though he showed a press badge, and “Libération” reporter Nicolas Descottes, who was stuck in the face,” commented the author of the report, Frank Smyth.

His report also contains concrete recommendations for all actors involved, from media outlets and national authorities to international organizations, to ensure better protections for journalists. These include: strengthening training for police and law enforcement actors on freedom of expression and appropriate behaviour in dealing with the media; providing appropriate training and equipment to journalists, including freelancers, sent to cover demonstrations; appointing national ombudsmen to hold police accountable for the use of force against journalists during demonstrations; and strengthening national mechanisms for the safety of journalists.

The 2020 Annual Report of the Council of Europe Platform for the Protection of Journalism also pointed out that alerts posted on the Platform in 2019 show that policing of protests and demonstrations is problematic in many countries: France, United Kingdom, Spain, Turkey, Albania, Azerbaijan, Russia.

The French EFJ affiliates, SNJ, SNJ-CGT and CFDT-Journalistes recorded in one year nearly 200 cases of journalists injured, intimidated, or prevented from working by police officers, gendarmes or magistrates.

The UNESCO report is published shortly after the observation of new obstructions to the work of journalists covering demonstrations in France. Several journalists were prevented by the police from doing their job on Saturday 12 September, when Yellow Vests resumed their demonstrations in several French cities. In Paris, the journalist Adrien Adcazz, who was filming a police intervention in a market for the online media HQ, was arrested by the police and spent 22 hours in police custody in Paris. Another photojournalist, Julien Moreau, who was covering the demonstration for Radio Bip, was also arrested on his way to the demonstration on the Champs-Élysées in Paris. He was held in police custody for more than 15 hours. The police destroyed his protective equipment (helmet, leggings, gas mask). The journalists of Taranis News were detained by the police for two hours. Other journalists were arrested, obstructed or subjected to police violence, including Taha Bouhafs, who was hit in the face by a policeman trying to remove his mask.