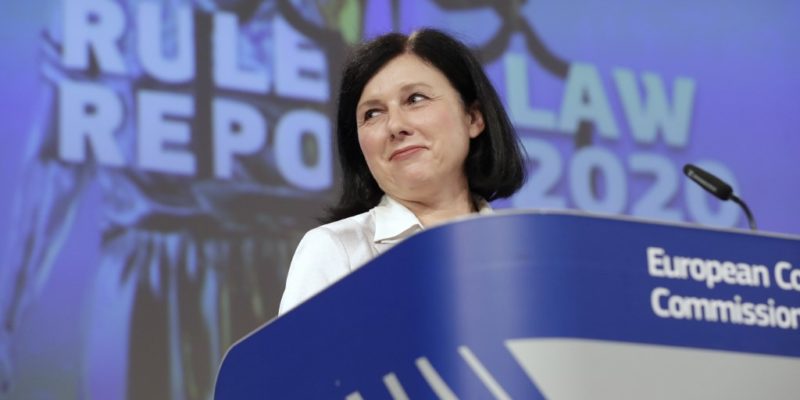 The European Federation of Journalists (EFJ) welcomes the publication of the European Commission report on the rule of law situation in the European Union. The EFJ calls on member states to put an end as soon as possible to the multiple violations of press freedom found in the report.

“We present the first ever Rule of Law Report today,” said the European Commission Vice-President for Values and Transparency, Věra Jourová. “Democracy, rule of law and fundamental rights are the foundations on which everything else is based in the EU: our rights, the freedom of the press or the independence of the judiciary.”

In its communication about the 2020 Rule of Law Report, the European Commission (EC) noted that “the murders of journalists who were investigating high-level corruption and organised crime allegations have been a wake-up call reminding Member States of the obligation to guarantee an enabling environment for journalists, protect their safety and pro-actively promote media freedom and media pluralism.”

The EC communication highlighted that the COVID-19 pandemic crisis “has revealed that the measures designed to tackle the ‘infodemic’ can be used as a pretext to undermine fundamental rights and freedoms or abused for political purposes. It has also amplified the already difficult economic situation of the sector due to a dramatic fall in advertising revenue, despite increased audiences. The situation is particularly difficult for vulnerable smaller players and local and regional media outlets. The strength and diversity of the media sector within the EU risk being weakened as a result.”

The Commission also recalled the alarming results of the EU Media Pluralism Monitor (MPM), which indicated the poor working conditions of journalists in 15 EU countries. “The latest results of the Monitor highlight, in particular, that journalists and other media actors continue to face threats and attacks (both physical and online) in several of the Member States monitored. The results further show that not all media regulators can be considered to be free from influence, both due to the manner of appointment of their boards and when implementing their remit.”

The EC communication pointed out the politicisation of media authorities in Hungary, Malta and Poland, and also the global lack of effectiveness of legal provisions regarding the transparency of media ownership (MPM report noted the fact that information is provided only to public bodies, but not to the public).

“In many Member States, there is no specific legislation to ensure fair and transparent rules on the distribution of state advertising to media outlets,” said the European Commission, mentioning bad practices in Hungary, Austria and Slovakia.

The EC identified a number of cases where serious concerns have been raised in terms of political pressure on the media (in Bulgaria, Hungary, Malta and Poland).

The right of access to information is not fully guaranteed in the Czech Republic, Malta and Romania. And “in a number of Member States, journalists and other media actors increasingly face threats and attacks (physical and online) in relation to their publications and their work, in various forms: the deployment of ‘SLAPP’ lawsuits; threats to physical safety and actual physical attacks; online harassment, especially of female journalists; smear campaigns, intimidation and politically oriented threats. Such threats, attacks and smear campaigns are reported in one form or another in several Member States,” including Bulgaria, Croatia, Hungary, Slovenia and Spain.

“It is high time to take action to ensure media pluralism and media freedom in Europe,” reacted EFJ President Mogens Blicher Bjerregård. “All EU Member States have signed the Council of Europe Recommendation on the Protection of Journalism. None of them have fully implemented it in practice. We call on European governments to fully implement their own commitments!”

1/3 We present the first ever Rule of Law Report today! Democracy, rule of law and fundamental rights are the foundations on which everything else is based in the EU: our rights, the freedom of the press or the independence of the judiciary. @dreynders pic.twitter.com/tbBxZKphno