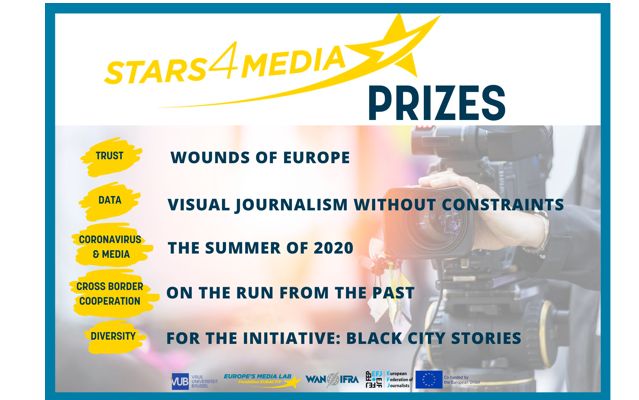 
The EU training and exchange programme Stars4Media has delivered its promises despite the COVID-19 outbreak. During one year, the pilot project involved 105 media professionals from 42 media outlets in 17 European countries. At the occasion of the Media4Europe conference, which took place on 14 October, the European Federation of Journalists (EFJ) and the World Association of Newspapers and News Publishers (WAN-IFRA) awarded the most outstanding Initiatives, among the 21 completed.

“You are all winners, stressed EFJ director and jury member Renate Schroeder as the programme already selected 21 Initiatives in Spring 2020. Together with the jury members, we decided to choose not without difficulty five of the most innovative, collaborative and sustainable realisations, which illustrate the essence of this project. All of the selected projects did not only show journalistic expertise but added a human touch and involved a lot of resources and time, so important in today’s world.”

It includes a podcast show about historical events, a European journey through the Summer of 2020,  an innovative media platform dedicated to Black People living in Europe and much more, and in fact many projects led by freelancers and small start-ups. Find all the Initiatives here and the 5 awarded productions below.

Stars4Media has  been a pilot project co-funded by the European Union and was managed by a consortium including the Brussels University VUB (Coordinator of the project), Europe’s MediaLab (Fondation EURACTIV), the European Federation of Journalists (EFJ), and the World Association of Newspapers and News Publishers (WAN-IFRA).

It started at the end of 2019 with the objective to urgently boost innovation in the media, a sector which turned out to be seriously affected by the COVID-19 pandemic. “We are more necessary than ever, but we are more in danger than ever. The situation is desperate for many” alerted WAN-IFRA President Fernando de Yarza during the conference.

EFJ President Mogens Blicher Bjerrgard listed long-standing issues that needed to be addressed urgently already before. The decline of local journalism, the need to develop new media business models, the lack of protection of freelancers and the spread of disinformation. In short, the sustainability of journalism as a whole.

So how can we offer stable funding to a sector which is greatly in need? The virtual policy debate invited MEPs and Commission’s representative to discuss political commitment and concrete solutions at the European level.

It highlighted the vital role of both national governments and the European institutions in securing enough money dedicated to permanent programmes for journalists and media outlets in the next EU budget and the Multi-annual Financial Framework (MFF) for 2021-2027. While they are still under discussion, it is clear after this final conference that the great commitment to journalism demonstrated by the work of the young generation should somehow be reflected in the future EU media policy.

The five special awards were given to:

Trust Prize: “Wounds of Europe”, developed by Linkiesta (IT) and Bulle Media (BE) for their Podcast series Oltre l’Europa focusing on six national conflicts, based on data journalism and historical research.

Cross-border cooperation Prize: “On the run from the past”, by Centro di Giornalismo Permanente (IT), StreetPress (FR), El Salto (ES), which is a moving cross border investigation collecting with a special human touch stories of citizens who disappeared during the time of southern American dictatorships and found refuge in Europe. Published in El Salto, in Spanish and in Street Press, in French.

Data Prize: “Visual journalism without constraints”, by Frameright (FI) and EFE (ES), is enabling content creators to know what they publish and how the content is being shown to the public. More information: What we learned during Stars4Media 2020.

Reacting to the Coronavirus Prize: “The summer of 2020”, led by 5 freelancers (BE, NL, DE), who worked together over the summer to report about the consequences of the Covid-19 pandemic in the European Union.