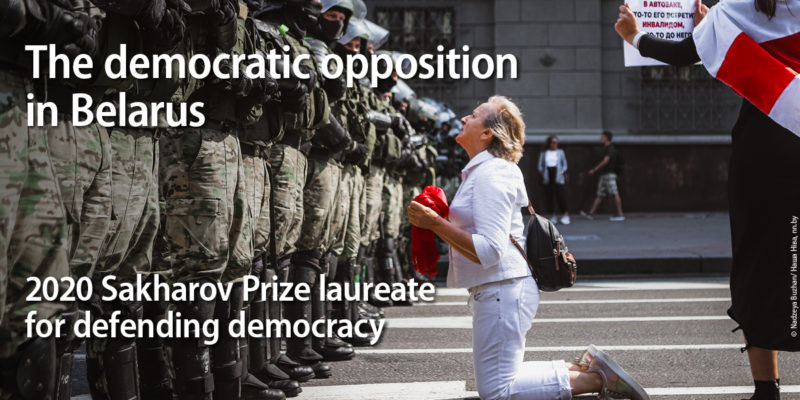 The democratic opposition in Belarus has won this year’s Sakharov Prize for Freedom of Thought, European Parliament President David Sassoli announced today. The Sakharov Prize is awarded by the European Parliament every year in memory of Soviet physicist and dissident Andrei Sakharov. The European Federation of Journalists (EFJ) welcomes the award of the prize to the Belarusian opposition and recalls that six journalists are still in prison in Belarus just for doing their job.

Protests erupted in Belarus following a disputed presidential election in August that Alexander Lukashenko claimed to have won with 80 percent of the vote, leading to a brutal crackdown from the authorities, including the arrest of opposition figures and journalists.

“They have stood and still stay strong in the face of a much stronger adversary. But they have on their side something that brute force can never defeat — and this is the truth,” Sassoli said in a statement. He encouraged the Belarusian opposition to continue their fight for freedom, adding: “We are by your side.”

On the occasion of the award ceremony, EFJ and the Belarusian Association of Journalists (BAJ) demand the immediate release of six journalists still behind bars in Belarus:

“Since the fraudulent elections of 9 August, there have been 292 cases of detention of journalists to prevent the press from covering mass demonstrations against electoral fraud and police violence,” said EFJ General Secretary Ricardo Gutiérrez. “The Belarusian judiciary is increasing the number of administrative sentences against journalists. Some are unjustly sentenced to 10 to 15 days in prison for doing their job. This repression must stop!”