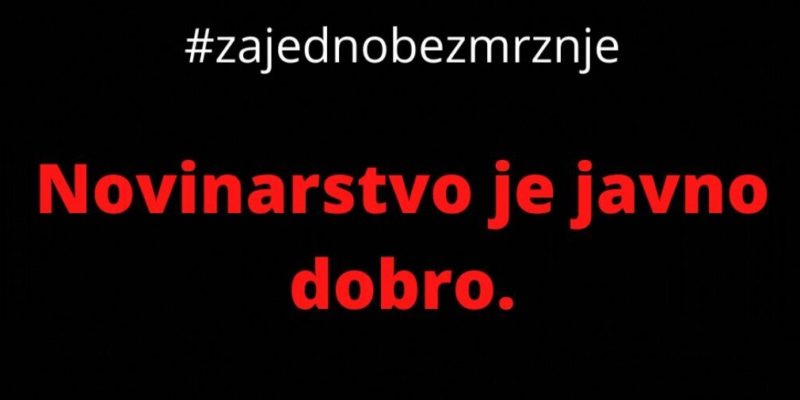 The Croatian Journalists’ Association (CJA) and the Trade Union of Croatian Journalists (TUCJ) just launched the #togetherwithouthate (#zajednobezmrznje) campaign. The objective is to warn against the destructive influence of hate speech online and offline journalists are facing because of their work, on the rise for many years.

The campaign was launched on Friday 23 October with a call on media outlets to disable the possibility to comment on their websites and social media, for two hours, from 11am to 1pm. Major Croatian media outlets took part in the action, including Jutarnji list, Slobodna Dalmacija, 24sata, Večernji list, Novi list, Glas Slavonije, Glas Istre, and explained their approach:

The editor-in-chief of Slobodna Dalmacija, Jadran Kapor: “We are doing this because of the unacceptable hate speech that has moved from social media to the portals of reputable media houses and in order to protect journalism. The path of aggression from the keyboard to the street is short.”

With this symbolic action, the Croatian Journalists’ Association (CJA) and the Trade Union of Croatian Journalists (TUCJ) wanted to “raise awareness of the conditions in which journalists have been working for years and the hate speech to which they are exposed.” The campaign was well received among the profession which recognises how thin the line between online threats and physical attacks can be.

“We all know that journalism is not a job in which we are given compliments, we know that with every published story we are provoking someone. But the problem is that hatred and threats are moving into the street more and more aggressively and we are concerned about the safety of our colleagues on the ground,” said Maja Sever (TUCJ) and Hrvoje Zovko (CJA).

On 6 November, the CJA and TUCJ will hold a forum with Croatian media’s editors-in-chief to discuss further steps of the #togetherwithouthate campaign.