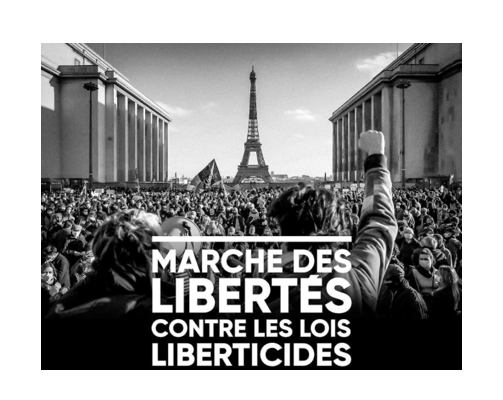 
As the vote on the first reading of the “Global Security” law achieved a majority in the French National Assembly on Tuesday 24 November, the International and European Federations of Journalists (IFJ-EFJ), as well as other representatives from the Media Freedom Rapid Response (MFRR) called on the French Prime Minister, Jean Castex, to withdraw three articles from the text, and on journalists and democracy activists to demonstrate on Saturday 28 November.

On Monday 23 November, a coalition composed of the International and European Federations of Journalists (IFJ-EFJ), together with their French affiliates, the SNJ, SNJ-CGT, CFDT-Journalists, and several journalists’ societies, filmmakers’ associations and human rights organisations (Ligue des droits de l’Homme and Amnesty International) met with the French Minister of the Interior, Gérald Darmanin, regarding the proposed law on Global Security and the new National Policing Plan (SNMO). In the absence of a constructive dialogue, the coalition decided to leave the talks, considering that Mr Darmanin was not behaving constructively, and asked instead to meet with the French Prime Minister, Jean Castex.

The draft law on Global Security was tabled by two deputies from the government majority and  secured a majority vote (388 votes for, 104 against) in the National Assembly on Tuesday 24 November. It seeks to amend the law of 29 July 1881 on freedom of the press as follows: “The act of disseminating by any means whatsoever and whatever the medium, with the aim of harming his physical or mental integrity, the image of the face or any other element of identification of an official of the national police or a military member of the national gendarmerie when he acts as part of a police operation is punishable by one year’s imprisonment and a fine of 45,000 euros.”

The IFJ, EFJ, their affiliates in France and the MFRR consider that this law is contrary to international legal standards on freedom of expression and disproportionately restricts the rights of journalists and press freedom. In concrete terms, this law will allow any journalist who filmed or photographed a police operation to be arrested, taken into police custody and sent to court after having his or her professional equipment seized. This law also aims to prevent the documentation and exposure of cases of illegitimate police violence which are often concealed by the hierarchy of officials involved.

The new National Policing Plan (SNMO) for police officers and gendarmes was made public by Gérald Darmanin on 17 September 2020. The text discriminates between journalists holding “a press card and accredited to the authorities” even though the exercise of the profession of journalist, as defined by the French Labour Code, does not require the possession of a press card. It also states that “the offence of remaining in a crowd after being summoned does not include any exception, including for the benefit of journalists or members of associations”.

The IFJ, EFJ, their affiliates in France and the MFRR see this as a blank cheque for the police to prevent journalists from reporting fully on demonstrations and other situations in the public interest. Again, the Plan is in contravention of the principles of freedom of information and expression enshrined in the European Convention on Human Rights and confirmed by the relevant case-law of the European Court of Human Rights.

“The French regulatory and legislative initiatives were criticised by the European Commission on Monday but also by the United Nations Office of the High Commissioner for Human Rights (OHCHR) in Geneva where the IFJ denounces freedom-destroying laws or violations of freedom of expression in general,” said Anthony Bellanger, IFJ General Secretary. “On Monday evening, I told Minister Darmanin that as things stand, France would be on the list of countries that violate press freedom at the next session of the OHCHR in early 2021, alongside Pakistan, Sudan, Somalia, Turkey, Israel…”

“Last year nearly 200 journalists were victims of police violence and intimidation in France, which resulted in France being listed among the “countries to watch” along with Turkey, Russia, Albania, Hungary, Serbia and Poland in the annual report of the Council of Europe Platform for the Protection of Journalism,” said Ricardo Gutiérrez, EFJ General Secretary. “This year, rather than solving the problem, the French authorities give the impression that they are trying to hide the problem by prohibiting journalists from photographing or reporting on the issue.”

The IFJ, EFJ, their affiliates in France and the MFRR denounce these restrictions on press freedom in total contradiction with international legal standards on freedom of expression.

They call on journalists and democracy activists to participate en masse while respecting social distancing rules in the “Marches of Liberties” organised throughout France on Saturday 28 November.

This statement was translated and coordinated as part of the Media Freedom Rapid Response (MFRR), which tracks, monitors and responds to violations of press and media freedom in EU Member States and Candidate Countries. www.mfrr.eu