60 journalists killed in 2020, including two in Europe 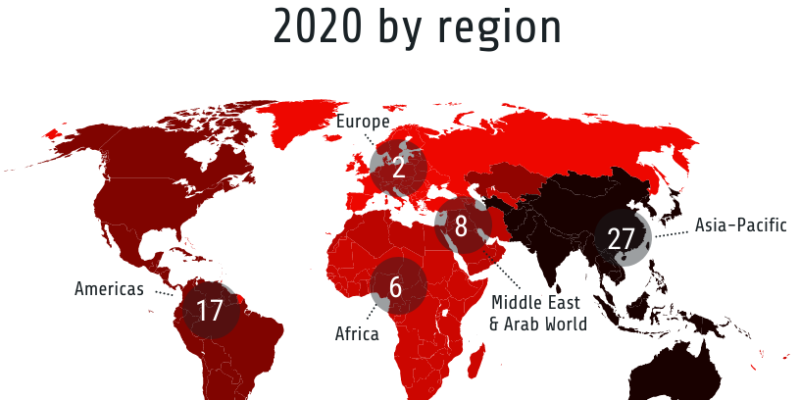 The International Federation of Journalists (IFJ) released its 2020 “killed list”. The year 2020 will go down in history as the year of an unprecedented global pandemic crisis, but also as the year of the resurgence of murders of journalists and media staff around the world. With 60 murders in 2020, including two in Europe, the macabre statistics are on the rise again compared to 2019 (49).

IFJ records show that the current number of killings of media professionals are at the same levels as in 1990 when the IFJ started publishing annual reports on journalists and media staff killed, which show peaks of death tolls in the mid nineties and mid-2000s.

Organised criminal cartels, extremists’ insurgencies and sectarian violence continue to strike terror among journalists, scores of who have paid the ultimate price for independent reporting in the four corners of the globe.

In this regard, 2020 has been no exception. The ruthless reign of crime barons in Mexico, the violence of extremists in Pakistan, Afghanistan and Somalia as well as the intolerance of hardliners in India and the Philippines have contributed to the continued bloodshed in media.

In particular, this year’s list features the killing of Russian journalist Irina Slavina, a case which perhaps exposed the level of despair and utter despondency in the face on unrelenting onslaught against media professionals. The Editor of Koza Press set herself on fire in the city of Nizhni-Novgorod to protest against the intimidation and harassment campaign to silence her. In the end, this led to her fatal act but not before she had blamed the authorities as bearing responsibility for her action.

“The trends in our publications over the last 30 years,but also in 2020, make it clear to all that there is no room for complacency. Instead, they are an urgent call to redouble our efforts to mobilise for greater protection of journalists and commitment to the safe practice of journalism”, said IFJ General Secretary Anthony Bellanger.

In its 2020 ranking per country, Mexico tops the list for the fourth time in five yearswith 14 killings, followed by India (8), Afghanistan (7), Pakistan (7), Philippines (4), Syria (4) while Iraq and Nigeria recorded 3 killings each. There were also two killings in Somalia.  Finally, there was one journalist killed in Bangladesh, Cameroon, Colombia, Honduras, Paraguay, Russia, Sweden and Yemen.