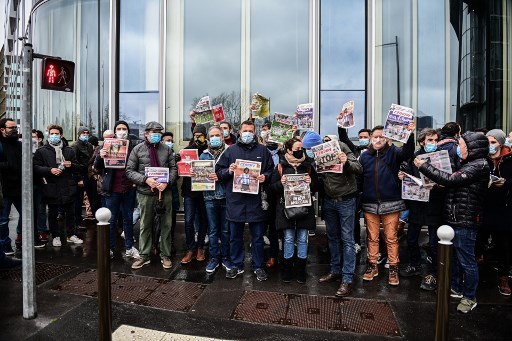 Journalists at sports newspaper ‘L’Equipe’ and France TV channels have taken strike action in a dispute over a job protection plan and dismissals. The International and European Federation of Journalists (IFJ-EFJ) stand in solidarity with striking workers and their French affiliates.

France’s public TV, France Télévisions, has seen strikes over the past two weeks at its headquarters in Paris, due to the unfair dismissal of four sound illustrators by video-conference, staff opposition to the arbitrary redefinition of working conditions and the excessive workload.

In parallel, the unions are to hold a 24-hour strike on 18 January due to the regionalization project at the France 3 network, which was planned without prior consultation with the unions.

‘L’Equipe’ journalists’ strike began on January 8 to protest against the job protection plan (PSE) launched this fall by Amaury Groupe, the media group that owns the newspaper and several other media. The plan is supposed to generate savings estimated at between 5 and 6 million euros in 2021 and would result in the dismissal of 47 journalists and 8 other employees, around 10% of the newspaper’s workforce.

IFJ General Secretary, Anthony Bellanger, said: “Journalists must have a say when media executives decide their future and the rules of their job. As the ones on the forefront of delivering coverage of the pandemic they should be applauded, not thrown on the scrapheap. We demand the immediate return of our colleagues and the review of all plans that will harm journalists’ ability to continue to deliver quality content”.

EFJ General Secretary, Ricardo Gutiérrez, said: “We cannot accept a project to reform the offer of the audiovisual public service without consultation with representatives of journalists. We call on the management of the channel to re-discuss the regionalization plan with the journalists’ unions”.