European journalists in solidarity with their Belarusian colleagues 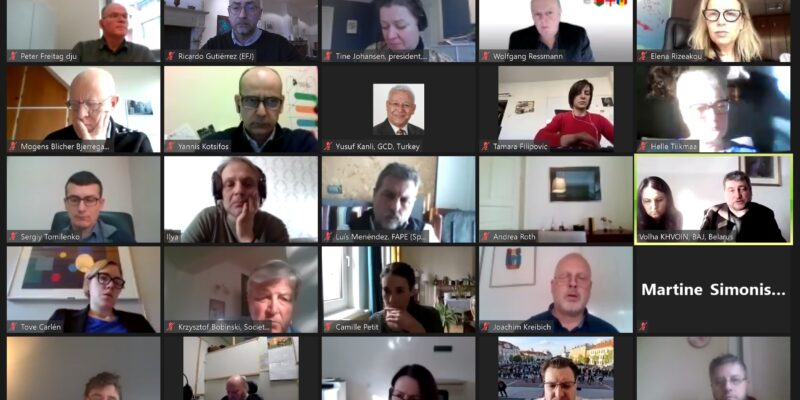 The solidarity meeting with the Belarusian Association of Journalists (BAJ) organised online by the European Federation of Journalists (EFJ) brought together 41 representatives of 29 national journalists’ organisations from 22 European countries (1) on Thursday. The participants unanimously condemned the increasing repression of journalists by the dictatorial regime of the illegitimate President Lukashenko. They demanded the immediate release of the 11 journalists imprisoned in Belarus for doing their job.

The EFJ President, Mogens Blicher Bjerregård, called on EFJ affiliates to intensify actions in support of BAJ. Many participants sent letters of protest to the Belarusian embassies in their countries, as well as to their governments and intergovernmental organisations. Further joint initiatives will be taken in the coming days.

“I expect the repression to intensify in the coming months,” said Andrei Bastunets, president of BAJ, referring to the two-year prison sentences of journalists Catarina Andreeva and Darja Chulcova. “Our colleagues now face criminal charges just for doing their job as journalists”.

During the latest wave of repression on Tuesday, BAJ’s offices were sealed and all the organisation’s equipment and documentation was seized, including the list of members.

“We are going to do everything we can to obtain a review of the trials of Andreeva and Chulcova and to obtain the release of the nine other imprisoned journalists,” said the EFJ President. “The international community cannot remain complicit in the illegitimate president’s abuses. We expect a firmer reaction and sanctions against those who repress press freedom in Belarus, be they politicians, police officers, prosecutors or judges”.

European solidarity in action with #Belarus right now. @baj_by President, Andrei Bastunets, explains the situation and express his expectations in the short and long term to EFJ affiliates. We all stand with Belarus #journalismisnotacrime pic.twitter.com/6bzsRukFX0