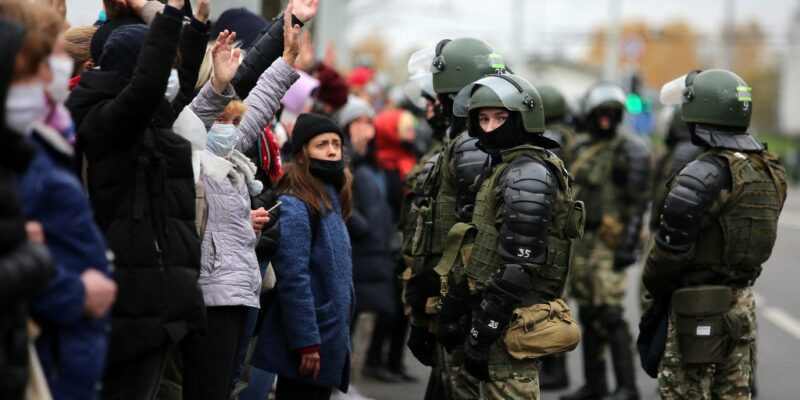 Belarus’ human rights situation has deteriorated further in recent weeks. The European Federation of Journalists (EFJ) believes this deterioration should be viewed in the context of the grave and systemic human rights violations the authorities committed in the run-up to the 2020 fraudulent presidential election and in its aftermath, for which there has been no accountability. The EFJ joins Amnesty International, the International Federation for Human Rights and Article19 in demanding action by the UN Human Rights Council to establish a new mechanism assisting the process of accountability for human rights violations in Belarus.

Developments in recent weeks mark a significant escalation in Belarus. These included raids on some of the country’s most respected independent civic organisations. On 16 February 2021, the police raided and searched the central office of the Belarusian Association of Journalists (BAJ), the EFJ affiliate in Belarus, and the two Minsk offices of the Human Rights Center Viasna, as well as Viasna’s office in Mahilioŭ. Police also searched the central office of the independent Belarusian Radio and Electronic Industry Workers’ Union REP.

The authorities also conducted searches at the homes or offices of more than 40 human rights defenders, journalists and their relatives in Mahilioŭ, Brest, Viciebsk, Homieĺ, Mazyr, Rečyca, Baranavičy among other cities. There were reports of excessive use of police force against individuals while police seized phones, computers, money, credit cards and even children’s digital tablets and money. In most of these cases, the raids and searches are part of a criminal investigation in which the government is falsely equating the legitimate work of journalists and human rights defenders with financing mass disturbances.

Recent weeks have also seen the wide-ranging targeting of journalists. Two journalists, Katsyaryna Andreeva Bakhvalava, and Darya Chultsova, were sentenced to two years in prison on 18 February for doing nothing more than documenting peaceful demonstrations in November. On 2 March, TUT.BY journalist Katerina Borisevich was sentenced to six months in prison and a fine, after she had contradicted official statements about the death of a protester, Roman Bondarenko, who the authorities suggested was drunk at the time.

The recent report of the United Nations High Commissioner for Human Rights, Michelle Bachelet, describes “a human rights crisis of a magnitude unprecedented in Belarus”. “Journalists have been routinely detained in the context of the protests, even when they clearly identified themselves as such with their press cards, without regard for their protection under international human rights law to exercise their functions of reporting during assemblies. Between 9 August and 20 December, 384 journalists were arrested, 80 were sentenced to administrative detention, several were fined, and 62 reportedly experienced violence and beatings. Some journalists were placed in pretrial detention and faced criminal charges, among them TuT.BY journalist Katyarina Barisevich, for allegedly disclosing confidential medical records while preparing an article about Roman Bondarenko. There have been numerous reports of the authorities revoking the accreditation of journalists, including foreign media correspondents, several of whom were arrested and deported from Belarus following the elections.”

Michelle Bachelet calls on the governement of Belarus to “immediately and unconditionally release all those unlawfully or arbitrarily detained for peacefully exercising their freedoms of expression, association and peaceful assembly or their legitimate functions, including human rights defenders, journalists and lawyers, and cease and reverse any administrative or criminal judicial action against people for exercising their human rights, including the rights to freedoms of expression and peaceful assembly”.

With regard to freedom of expression and opinion, the High Commissioner recommends that the government:

“The international community cannot remain passive in the face of the refusal of dialogue and the intensification of repression by Mr Lukashenko’s regime,” said EFJ President Mogens Blicher Bjerregård. “New diplomatic weapons are needed to stop the continuing violations of human rights and press freedom.”

The UN Special Rapporteur on Belarus, Anais Marin, continues to be denied the opportunity to engage directly with the authorities or travel to the country. His mandate remains an essential mechanism for long-term monitoring of the situation in Belarus. However, the Human Rights Council must elevate its response to meet the needs of the current crisis, particularly to ensure accountability. It is therefore essential that the Human Rights Council, as the premier global human rights body, shows leadership to facilitate a process of accountability through the creation of a new mechanism that can lead to identifying perpetrators and holding them to account. This mechanism should have the following elements: