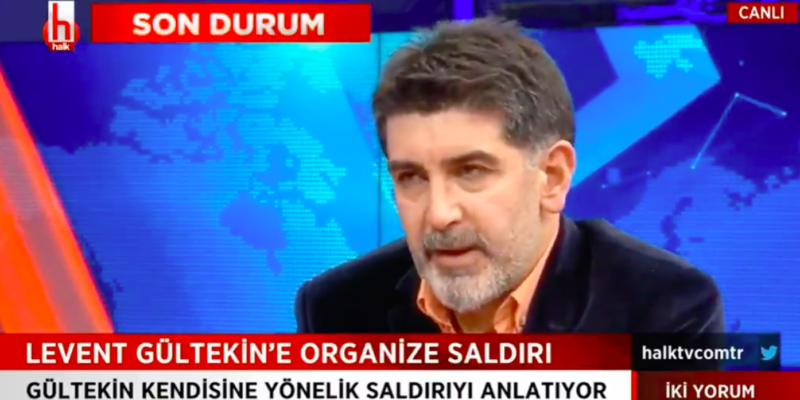 In the afternoon on 8 March, journalist Levent Gültekin was attacked by a group of around 20 people just metres away from his workplace at the Halk TV station in Bakırköy, Istanbul. The European Federation of Journalists and its Turkish affiliates, the Journalists’ Union of Turkey (TGS), the Journalists’ Association of Turkey (TGC), the Journalists’ Association (GCD) and the Broadcast and Printing Press Workers Union, strongly condemn this brutal aggression and call for thorough investigations. The roots of such attacks, namely hatred-stirring, politically motivated online threats and insults, must also be addressed.

The attack took place when Gültekin was on his way to the station as he co-hosts a show at Halk TV. Via Twitter he shared moments later: “I was attacked by a group of 25 bandits in front of the channel. I’m okay right now. I’ll tell you soon on the program.”

Shortly after, the journalists indeed appeared on Halk TV, where he talked about the attack and video footage thereof was shown. On the video, which stems from Halk TV’s CCTV, it can be seen how a group of people repeatedly kicked the journalist. The attack resulted in broken fingers as Gültekin was trying to protect his head.

During the show, Gültekin stated that he had previously received numerous threats and insults via social media, including from high-tier politicians. For instance, on 4 March, Semih Yalçın, Deputy Chairman of the Nationalist Movement Party (NMP), tweeted about Gültekin, calling him a “racist minority journalist” who was “in a state of insanity” and “hates the loved ones of this nation”. Gültekin had recently been critical of the NMP and indicated that the assault might be a result thereof.

Ali Ergin, board member of the Broadcast and Printing Press Workers Union, added: “The Nationalist Movement Party (MHP) had threatened many journalists before and this attack was not the first. There have been many attacks following the threats from MHP and for years the ruling party AKP did nothing to stop this dirty game.”

The Journalists’ Union of Turkey (TGS) strongly condemned the attack: “We urge the authorities to immediately punish the assailants who targeted our colleague #LeventGültekin. We will not be silenced despite those who seek to strangle different opinions through hate and mobs! Turkey’s democracy will not die.”

Ricardo Gutiérrez, the EFJ Secretary General, said: “Such acts of terror against media workers must be strongly condemned by Turkish public authorities. Apart from calling for thorough investigations, media-hostile politicians must change their rhetoric, as their threats and insults often motivate such acts.”

This brutal attack on a Turkish journalist is one among various similar cases in the country. Just in the first 15 days of 2021, TGSrecordedfive attacks against journalists. In general, the situation for press freedom in Turkey is precarious: Today, 65 journalists and media workers are in prison.