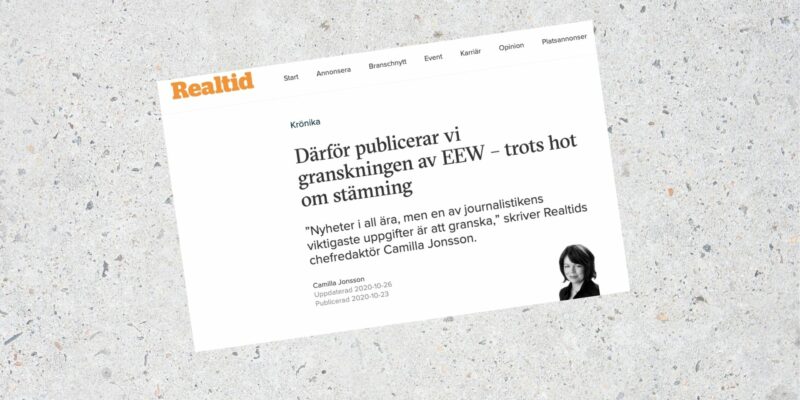 The European Federation of Journalists (EFJ) joined twenty-three organisations in expressing their solidarity with the Swedish business and finance publication, Realtid, its editor, and the two journalists being sued for defamation in London. Realtid are due before the High Court on 24 March for a two-day remote hearing that will decide whether England and Wales is the appropriate jurisdiction for the case to be heard.

Realtid is being sued by Swedish businessman, Svante Kumlin, and his group of companies Eco Energy World (EEW), for eight articles that they published last year. Realtid had been investigating EEW ahead of an impending stock market launch in Norway, a matter of clear public interest. Prior to publication, the journalists contacted Kumlin and EEW to request an interview and reply, but neither were provided. In November 2020, Kumlin and EEW filed a defamation lawsuit at the High Court in London against Realtid, its editor-in-chief, and the two reporters behind the investigations.

“We are concerned about the use of litigation tactics to intimidate journalists into silence,” five international freedom of expression and media freedom organisations wrote in a statement last December, which condemned the legal action and deemed it a strategic lawsuit against public participation (Slapp). Slapps are a form of vexatious legal action used to silence public watchdogs, including journalists.

The hearing is expected to conclude at lunchtime on Thursday 25 March, but the judgement that will decide whether England and Wales is an appropriate jurisdiction for the case to be heard is likely to be reserved for a later date. Although Realtid is a Swedish-language outlet based in Sweden and Kumlin is domiciled in Monaco, Kumlin and EEW claim to have “significant business interests” in England that, they claim, provide sufficient grounds for the case being brought in the UK.

Ahead of the hearing we, the undersigned organisations, express our solidarity with Realtid. We are extremely concerned that this Slapp appears to be an effort to discredit the journalists and force them to remove their investigative articles.