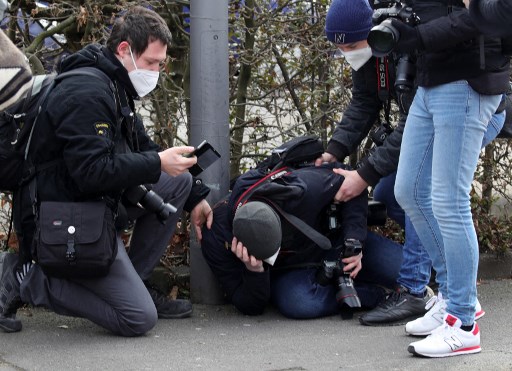 The code presented last Thursday was developed by advisory and journalists’ organisations, including DJV and dju in ver.di. Among others, it includes the recommendation to appoint a fixed contact person per media organisation to whom journalists can turn when facing threats or attacks due to their reporting. Notably, this should apply for employed and freelance journalists. This contact person should inform affected journalists regarding their legal, psychological, psychosocial and financial support options and accompany them until their safety is ensured.

“We appreciate this move by the unions and other organisations, which is completely in line wit the Council of Europe Recommendation on the protection of journalists and safety of journalists and its implementation guidelines. And yes, the government has obligations, the police has obligations AND the media employers have obligations to better protect their staff including freelancers,” said EFJ President Mogens Blicher Bjerregård. ” And we highly welcome those media who joined the code and take the protection of journalists’ health and safety seriously“, he added.

Moreover, media should offer reporters to be accompanied by security personnel when they travel to demonstrations for filming, for example. In Germany, demonstrations have become a particularly dangerous environment for journalists lately. Further points of the code are the quick blocking of haters’ profiles in social networks or follow-ups regarding legally punishable mails and comments.

“The worrying increase in violence against journalists means that the media companies have to live up to their responsibility for their colleagues,” explained DJV President Frank Überall. The code offers a guideline for uniform actions by publishers and broadcasters. Überall further emphasised that all parties involved in the fight against violence must work together: journalists, police, publishers and broadcasters: “Blaming each other after assaults doesn’t help.”

Monique Hofmann, General Secretary of dju in ver.di, pointed out that journalists must be able to rely on receiving necessary support in case of attacks: “There is a serious danger that media professionals avoid reporting on certain topics out of reasonable concern for their safety, thereby creating blind spots.” According to Hofmann, the code is also a “signal to the outside world”.

“dpa”, “taz”, “Zeit” and “Zeit Online”, “Spiegel” and “Frankfurter Rundschau” have already joined the code of protection. Media houses that want to follow can contact the members of the initiative.