What’s up for World Press Freedom Day in Europe 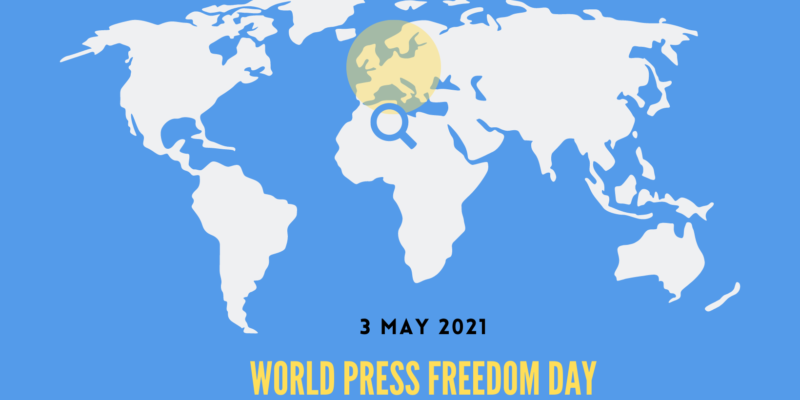 After a year in lockdown, the European Federation of Journalists (EFJ) and its members have observed a clear deterioration of press freedom in Europe. The facts are indisputable: according to the annual report of the Council of Europe’s Platform for the Safety of Journalists published on Wednesday 28 April 2021, 201 alerts were recorded, an increase of 40% compared to 2019. In particular, the number of physical attacks on journalists and media workers, as well as the cases of harassment and intimidation reached a record level.

Nevertheless, journalists’ trade unions and professional associations have stepped up their work throughout 2020 to support journalists facing job losses, pay cuts or even more difficult working conditions. Ahead of 3 May, we recall that a free press is not a given: it must be defended, protected and valued for what it offers to each citizen.

On this occasion, next Monday, the EFJ will launch a survey to collect journalists’ perceptions on health and safety issues as part of the “Safety4Journalists” project. The results will be analysed and used to map out the health and safety needs of journalists. It will eventually contribute to the safety training courses that will be developed by the EFJ and its partner organisations. EFJ General Secretary Ricardo Gutiérrez will also participate in the round table organised by AGK (see below). The same day at noon, Director Renate Schroeder is invited by the European Parliament Liaison office in Ljubljana to discuss the latest developments on media freedom in the EU, including Slovenia. The discussion can be followed live here.

The EFJ listed below some of the activities and actions organised by its affiliates across Europe to mark World Press Freedom Day.

The Flemish Association of Journalists (VVJ) will organise a debate on May 3 with four Flemish journalists to discuss the status of journalistic and media freedoms in the world and the lessons to be learned for Belgium. Participation is free, but registration is mandatory (click here).

The EFJ is one of the endorsers of “Difference Day”, which is the local variation of the World Press Freedom Day in Brussels, on the 2nd and 3rd of May. This year’s theme: “Women Breaking the News”. Programme & registration: www.differenceday.com

Croatia / Together for Local Media campaign

The Trade Union of Croatian Journalists (TUCJ) has launched ahead of the local elections the Together for Local Media campaign to raise awareness about the poor position of journalists in local media and their mostly non-transparent and subsidy-dependent funding system. Videos messages of journalists will be published on May 3 as part of the campaign actions.

The Estonian Union of Journalists (EAL) has produced and released a campaign video about the situation of journalism in Europe, with the participation of EFJ Director Renate Schroeder. The video can be viewed here.

“Is research and communication free?” will be the topic of the panel discussion organised by the Union of Journalists in Finland (UJF), Finnish Unesco Commission, Publicity of information Advisory Board and RSF Finland, from 15:00 to 17:00. Chaired by Hanne Aho, UJF President. Information and registration here.

Germany / Solidarity throughout the country

Regional branches of the DJV will mark WPFD with online talks, a protest letter and press releases in support of countries where the situation of media freedom is poor or non-existent. In Bavaria, a competition will reward journalists for their works on the topic of press freedom. Journalists from Germany can participate until 5 May.

On 2 May, an initiative in support of Belarusian journalists will take place in Trento, the city of inclusion and human rights. It is organised by the Italian journalists’ union (FNSI) together with other journalists’ organisations and the Municipality of Trento.

What is a day without media and journalists like? A video of a black screen (#BlackoutMay) will be broadcast in “Ibrahim Rugova” square and on several media at 19:00. The Association of Kosovo Journalists (AGK) will also organise a press conference and a roundtable about the impunity cases of journalists killed during and after the war in Kosovo. The EFJ General Secretary Ricardo Gutiérrez will participate in the round table organised by AGK.

The Independent Journalists’ Association of Serbia (NUNS) will run a video campaign to raise awareness about the daily attacks on Serbian journalists and media workers. They are increasing every year and yet, five journalists will explain how they continue to inform the public in difficult circumstances. “You will never be alone in defending the truth and defending your profession”, the campaign says.

A Crowdfunding campaign to support the Slovenian Press Agency STA will be launched on 3 May, as STA is under financial pressure from the government which has just suspended payments for the second time in three months. The campaign will last the whole month and aims to raise 2 millions euros = 1 euro for every citizen.

Spain / Manifesto to mark Labour and Press Freedom Days
The Federation of Journalists’ Unions (FeSP) published a Manifesto ahead of Labour and World Press Freedom days calling on the government to take urgent measures to put an end to job and social insecurity, in particular of freelancers, and improve the citizens’ right to information. “Information must be deconfined and vaccinated against lies, which are increasingly abundant and harmful to society,” the manifesto reads. In addition, the Catalan Journalists’ Union is organising an online event at 18:00 entitled “The virus of precariousness. Journalists in times of pandemic “. Information and registration here.
Turkey / Panel discussion
“Journalism and legal protection; is it possible?” from 14:00 to 15:30 with the participation of journalists Barış Terkoğlu, Müyesser Yıldız, and co-chairperson of the Media and Law Studies Association Veysel Ok. Turkish English interpretation provided. Organised by the Association of Journalists (GC) in collaboration with the İzmir Association of Journalists (İGC) and the Journalists’ Union of Turkey (TGS). Information and registration here.