Slovenian authorities should halt the deterioration of media freedom 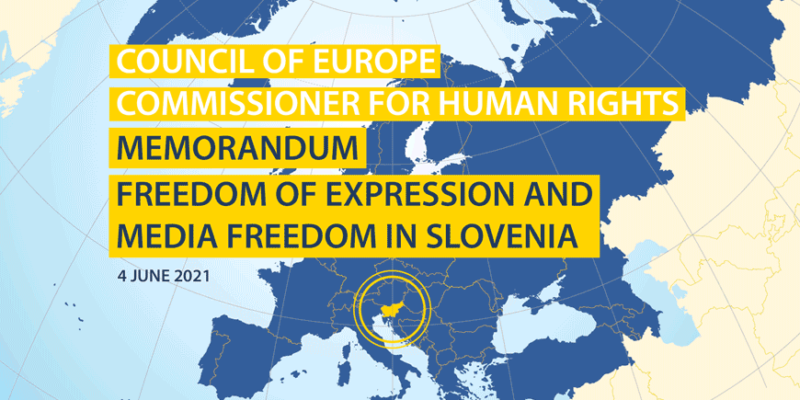 In a Memorandum published today, the Council of Europe Commissioner for Human Rights, Dunja Mijatović, calls on the Slovenian authorities to put a stop to the marked deterioration of freedom of expression and of the media in the country.

The Commissioner warns that some steps taken by the Slovenian government in recent months risk undermining the ability of independent voices to speak freely. She stresses that hostile public discourse, as well as smear campaigns and intimidation targeting civil society activists and those who express critical opinions, harm free expression and can have a chilling effect on media freedom.

The Commissioner calls on the Slovenian authorities to take action to appease tensions in society and to encourage mutual respect in the exchange of opinions. Noting the specific responsibility of political leaders in this regard, she calls in particular on members of the government to make a responsible and dignified use of social media platforms. “Members of the government must refrain from making stigmatising and misleading comments about the work of civil society, and should publicly condemn such discourse by others”, said the Commissioner.

“Prime Minister Janez Janša and other politicians maintain a hostile rhetoric towards journalists in the hope of discrediting them,” reacted EFJ General Secretary Ricardo Gutiérrez. “This verbal violence can lead to physical violence against them. These extremist politicians undermine democracy and the right of Slovenian citizens to access independent information. We will continue to systematically denounce these heinous attacks.”

The Commissioner regrets that the Slovenian government appears to have used the COVID-19 pandemic to discourage the free expression of dissent or political opposition. Several measures restricting the right to protest, including prolonged blanket bans on public assemblies and heavy fines imposed on protestors, seem disproportionate and risk undermining freedom of expression. While being mindful of the authorities’ responsibility to protect public health, the Commissioner recommends that the authorities find the proper balance in order to uphold the right to freedom of peaceful assembly. She stresses that democratic governance requires the facilitation of public participation and taking public opinion into consideration.

The Commissioner furthermore regrets the deterioration of the conditions underpinning media freedom in Slovenia, pointing out a range of problems, including harassment, intimidation and criminal lawsuits against journalists, restrictions on access to public information, and government actions against public service media. The Commissioner deplores in particular a trend of sexist harassment and misogynistic speech against female journalists. “Appeased government communication toward journalists is important to set an example and diminish the level of animosity against the press in the country”, said the Commissioner.

The Commissioner recommends that the authorities initiate a societal debate on how to tackle the scourge of sexist harassment against female journalists, decriminalise defamation and amend legislation to prevent abusive lawsuits that aim at undermining public participation. She also recommends facilitating journalists’ access to public information and state authorities, and ratification of the Council of Europe Tromsø Convention on Access to Official Documents.

The Commissioner stresses that public service media serves a specific role in a democratic society, by providing high quality programming for all segments of the population and trustworthy information. She regrets steps taken by the government that risk undermining the independence, credibility and financial stability of the public broadcaster RTV and the national press agency STA. “It is of paramount importance for media freedom in Slovenia to preserve the national independent press agency, and I reiterate my call to the Slovenian government to urgently re-instate adequate public funding for STA,” said the Commissioner.

The Commissioner observes that the recent deterioration of media freedom in Slovenia is happening in the context of systemic weaknesses in the regulation of the media market in the country, which should be addressed in order to bolster independent, high quality and diverse journalism. To that effect, she recommends increasing transparency of media ownership in order to tackle interference in editorial independence based on political and commercial interests, addressing conflicts of interest between political parties and media outlets, and setting up a mechanism to ensure more effective regulation of the media market.

“While a review of several media laws in the country appears to be necessary, the revised bills should take into consideration the input of media experts and representatives and not include any provisions that could weaken public service media”, the Commissioner added. Lastly, the Commissioner recommends that the authorities consider devising a national strategy on strengthening media independence and pluralism in order to better direct public funding to media.

Read the Commissioner for Human Rights’ memorandum on Slovenia.