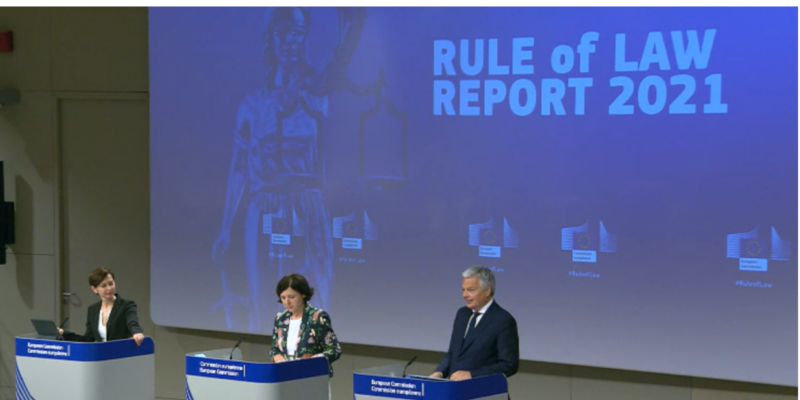 The European Commission published its second EU-wide report on the Rule of Law, with a Communication assessing the situation in the EU as well as in dedicated country chapters on each Member State. The report examines new developments since the first report last September and takes into account the impact of the pandemic. The European Federation of Journalists (EFJ) welcomes that the report tackles the deteriorating situation of journalists’ safety as well as obstacles such as lack of transparency or political interference and calls on the Member States to improve the conditions and legislation for media workers.

The methodology behind the assessment includes close collaboration with the Member States, country visits organised by the Commission, targeted stakeholder consultation (including the EFJ) and input from the Council of Europe. The report serves as a basis for inter-institutional cooperation between EU institutions and dialogue with the Member States. Media pluralism and media freedom constitute one of the four key areas of the report, which is a preventive mechanism as part of the larger EU effort to promote and defend its founding values.

In a press conference on 20 July 2021, Věra Jourová, Vice-President for Values and Transparency, and Didier Reynders, EU Commissioner for Justice, presented the report. Here is a replayof their remarks.

In her speech, Věra Jourová stated: “Many Member States reported about increased harassment, threats and violence against journalists, especially women journalists, and media as such. The tragic murder of Dutch journalist Peter R. de Vries is the latest of a series of worrying attacks on European journalists in recent years. On top of that, we have fresh media reports alleging that some journalists in the EU were subject to surveillance. This is unacceptable. Independent media is elemental to the functioning of any democracy.”

Below, a summary of the report’s main findings on media pluralism and media freedom.

The report refers to the Media Pluralism Monitor (MPM), which is a tool assessing the risks to media freedom and pluralism in all Member States. The MPM 2021 was just recently published. It focuses on four areas: basic protection of media freedom, market plurality, political independence and social inclusiveness of media. It found that none of the countries analysed are free from risks to media pluralism. Compared to last year’s report, fundamental protection of journalists and press freedom has deteriorated; there are growing economic threats to media pluralism; and seven countries are at high risk of political independence.

Reforms to strengthen the independence of media regulators

All Member States have legislation in place setting out the competencies and independence of media regulators, which play a key role in upholding and enforcing media pluralism. The Audiovisual Media Services Directive (AVMSD)44 includes specific requirements to strengthen the independence of national media authorities. Some countries (e.g. Belgium, Bulgaria, Greece, Latvia, Luxembourg and Sweden) have introduced new legislation or are preparing such legislation (Czechia, Cyprus, Estonia, France and Poland). However, other countries, such as Romania, Slovenia, Spain, Croatia or Hungary, are of concern due to inadequacies of the regulator’s resources or the absence of effective safeguards against political interference.

The report also provides information on which Member States have adopted measures to transparently provide information regarding media ownership or the allocation of state advertising. Such transparency is vital in order for audiences to be aware of potential political influence and dependence and to reliably analyse the plurality of media markets. In several Member States, there are still practical problems to identify ultimate owners, such as in Slovenia or Czechia or Bulgaria. Specific legislation on the transparent and fair distribution of state advertising is still lacking in countries such as Austria, Croatia, Bulgaria, Hungary or Poland. Political interference and pressure on media have continued in numerous Member States, for instance in Czechia, Malta, Slovenia, Poland, Bulgaria or Hungary.

“The right of access to information held by public authorities is a fundamental precondition for media, as well as civil society and citizens at large, to be able to play their role in democratic debate and scrutiny of public institutions,” reads the report. While new legislation has come into force (Cyprus) or is being planned (Austria), practical obstacles remain in many countries. Shortcomings concern the level of compliance (Romania), the enforcement of decisions of the Information Commissioner (Croatia) or the lengthy procedures for access to official documents (Luxembourg).

Protecting journalists against threats and attacks

Cases such as the murder of Greek journalist Giorgios Karaivaz in April 2021 and the murder of Dutch journalist Peter R. de Vries in July 2021 highlight the need for improved safety of journalists across the EU. The report refers to the Council of Europe Platform as well as the Mapping Media Freedom Platform. Both recorded an increase in alerts in 2020, including harassment, psychological abuse, legal threats, physical assaults, attacks on property, hate speech, smear campaigns and censorship. Physical attacks have been reported in particular in the context of public protests, where journalists in France, Germany, Greece and Poland have been subject to aggression from protesters, but also in some cases police forces. Online threats are on the rise across the EU, with female journalists and journalists of minority backgrounds particularly at risk. In some countries, such as Slovenia, politicians or powerful figures are initiating such attacks. Several Member States have set up mechanisms (e.g. Netherlands, Italy) or are planning legislative safeguards for the protection of journalists (e.g. Finland, Sweden). Strategic lawsuits against public participation (SLAPPs) are a serious concern in several Member States, for instance in Croatia or Poland.

The impact of the pandemic

While the demand for fact-checked information has substantially increased, the pandemic also triggered serious economic challenges for the media sector and media workers. An unprecedented loss of revenue has hit many media houses, with local and regional outlets most affected. Unemployment levels have risen, increasing journalists’ vulnerability to pressure. About half of all Member States put specific media support schemes in place, but it often proved difficult to include the already vulnerable group of freelance journalists. Certain aspects of these schemes were questioned, for instance, their transparency (Malta), fairness of distribution criteria (Austria) or the impact on citizens’ trust in the media (Romania). Apart from financial hardships, some restrictions during the pandemic also affected journalists’ ability to access information. In some Member States (e.g. Hungary), journalists faced obstacles to accessing venues or press conferences. In Romania, the pandemic was used to justify delays or refusals to provide information.

In conclusion, the report shows that both positive and negative developments have taken place since the publication of the previous report. The adoption of the 2021 report marks the start of a new cycle of dialogue and monitoring. The EFJ joins in the call on the Member States to effectively take up the identified challenges to improve media pluralism and media freedom, as these constitute a vital pillar of democracy.