One year of repression in Belarus: 29 journalists in captivity 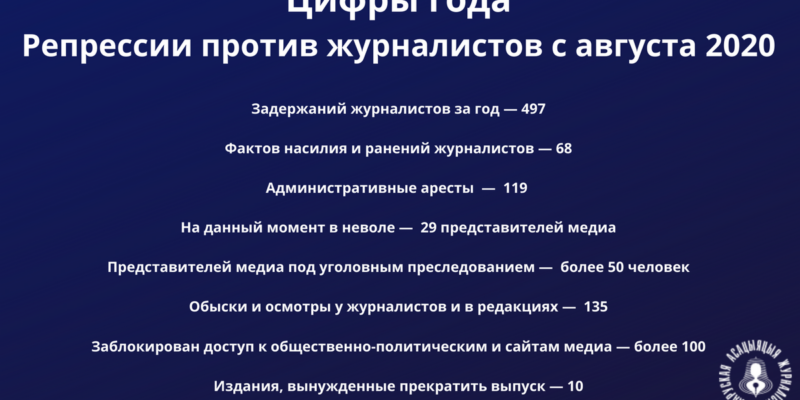 One year after the fraudulent re-election of illegitimate president Alexander Lukashenko, the Belarusian regime’s repression has taken a dramatic toll: 497 journalists and media workers have been arrested, 29 are still in detention. The European Federation of Journalists (EFJ) calls on the international community to take action.

Here is the result of one year of repression in Belarus, as monitored by the Belarusian Association of Journalists (BAJ):

“We call on the international community, and in particular the European Union, the Council of Europe and the Organisation for Security and Cooperation in Europe, to redouble their efforts to punish the perpetrators of this endless repression,” said EFJ President Mogens Blicher Bjerregård. “The dictatorial regime is showing its true face. It has planned the liquidation of our affiliate BAJ! What are the intergovernmental organisations waiting for to intensify and amplify the sanctions?”

“So far, the sanctions adopted by the EU against some 100 Belarusian dignitaries have not had any effect”, added EFJ General Secretary Ricardo Gutiérrez. “We must now go after all European companies and States that collaborate with the dictatorship and are therefore accomplices in the ongoing repression in Belarus. It is also becoming urgent to support the exfiltration of Belarusian democrats, including journalists, and help them operate from abroad. It is time to organise resistance to the dictatorship.”