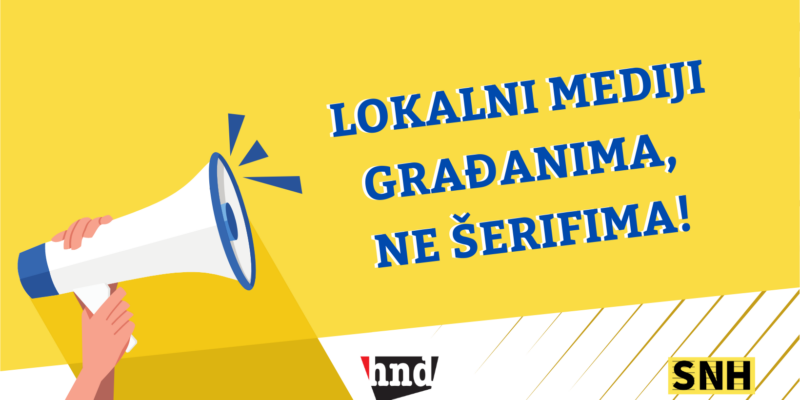 After the dismissal without prior notice of two journalists and one cameraman from the local station TV Šibenik, the Croatian Journalists’ Association (CJA) and the Trade Union of Croatian Journalists (TUCJ) repeat their call for a national collective agreement to ensure local media’s independence and journalists’ labour rights, referring to their campaign “Local media for citizens, not sheriffs“. The European Federation of Journalists (EFJ) joins its Croatian affiliates in condemning these extraordinary dismissals and supports the demand for a collective protection mechanism.

On 13 August, the CJA and TUCJ held a press conference to denounce the recent decision of the owner of TV Šibenik, Stipe Grcić, to dismiss the journalists Lucija Cvitan and Ivana Bulat, as well as the cameraman Jurica Cindrić without prior notice. Upon request to the Minister of Culture and Media and the director of TV Šibenik, the precise reasons behind the media workers’ dismissals were not explained. But it is known that Cvitan’s contract was not extended after having worked as a show editor for years and that the director put up a note on the front door saying she was forbidden to enter the newsroom.

Hrvoje Zovko, the CJA President, labeled this behaviour “scandalous, especially since TV Šibenik is partly financed with public money”. He further said: “What is happening to journalists is becoming more and more unbearable and we cannot remain silent about it, nor can state institutions. Journalists are harassed, they are threatened with lawsuits, they are threatened by local sheriffs. Here we have almost the arrest warrant of Mr. Stjepan Grcic. Last night, we sent him a letter from the CJA asking for his statement on this case, but he has not yet responded.” Zovko also compared the sackings to the previous dismissal of three journalists by the daily paper Glas Istre after they had openly criticised the paper’s biased editorial policy.

Maja Sever, the TUCJ President, further explained: “These dismissals are a true portrayal of the situation in the local media here. The owners disrespect a number of rights and regulations and journalists do not have adequate protection of their professional rights. Many never talk about the problems that got them fired. Political pressure and pressures from the owners on local media are terrible. People in local media are completely left to their own devices.” The solution to the problem, Sever concluded, could be a national collective agreement that would define journalistic rights for all.

The EFJ General Secretary, Ricardo Gutiérrez, reacted: “The current situation of local media workers in Croatia is unbearable, with the most recent dismissals being yet another example of how vulnerable media workers are. We call for more transparent funding of local media as well as a strong collective agreement to protect journalists. If it has not happened already, we urge those responsible to remove the humiliating note from the front door of TV Šibenik!”