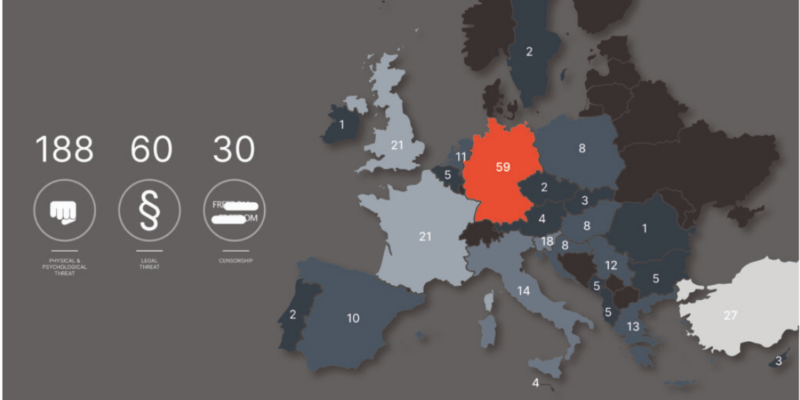 
The fourth Media Freedom Rapid Response (MFRR) monitoring report documents attacks against press workers and media across EU Member States and Candidate Countries between January and June 2021 and is again shaped by the Covid-19 pandemic. The number of violations is alarming and has continued to rise: This is the highest figure of attacks ever recorded by the MFRR partners and the data testify that demonstrations are becoming an increasingly dangerous environment due to radicalisation and polarisation.

Compiled by the European Federation of Journalists (EFJ) and the International Press Institute (IPI), with the support of the European Centre for Press and Media Freedom (ECPMF), this report counted a total of 272 alerts, ranging from verbal attacks to legal incidents, affecting 436 individuals or media entities in 26 countries, including the murder of veteran crime reporter Girogos Karaivaz in Greece.

In comparison, the first report recorded 120 alerts (March to June 2020), the second 114 (July to October 2020) and the third 147 (November 2020 to February 2021). It must be noted that this is the first time that the monitoring report covers six months instead of four to better reflect general trends. 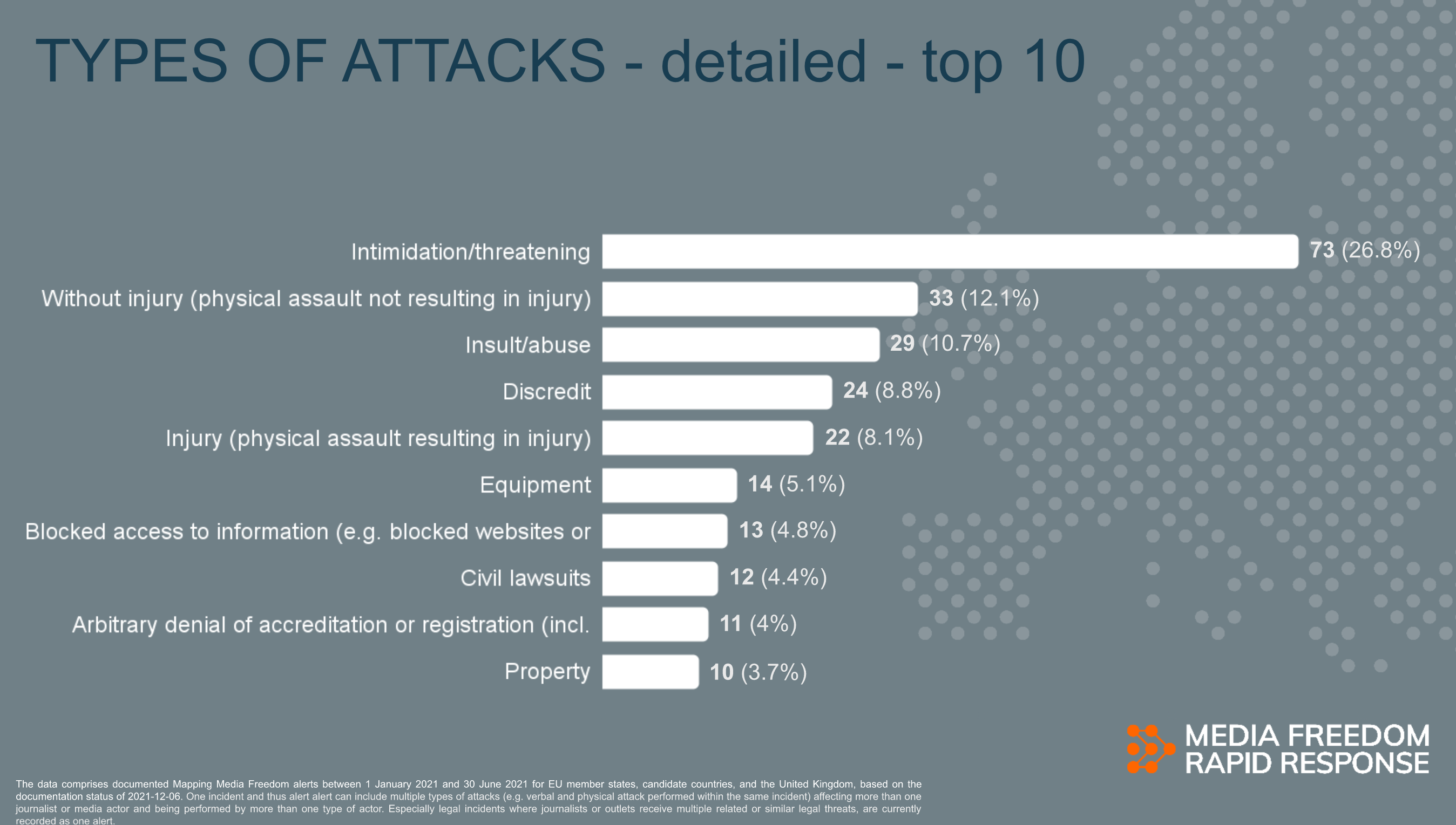 The most commonly recorded violation has been intimidation/threats (26.8%), followed by physical assaults not resulting in injury (12.1%), Insults to media workers are the third most common threat (10.7%), followed by discrediting, physical assault resulting in injury, and attacks to equipment. Online threats have been on the rise in most countries, a trend that is widely explained in the cross-country thematic section of the report. Journalists and media freedom organisations have been warning of the mental health consequences of such threats on media professionals who may feel isolated, at risk, or defenceless in the face of such violent events. Online threats related to journalistic work include threatening messages, attempts to discredit journalistic work, insults or trolling.

The source of the majority of the online threats were individuals (18 cases) but also a significant number of public figures in high-ranking positions (11) were found to actively contribute to creating this toxic environment. This phenomenon is particularly visible in Slovenia, where Prime Minister Janez Janša regularly uses his Twitter accounts to express dissatisfaction with a publication or the little consideration he has for journalists. 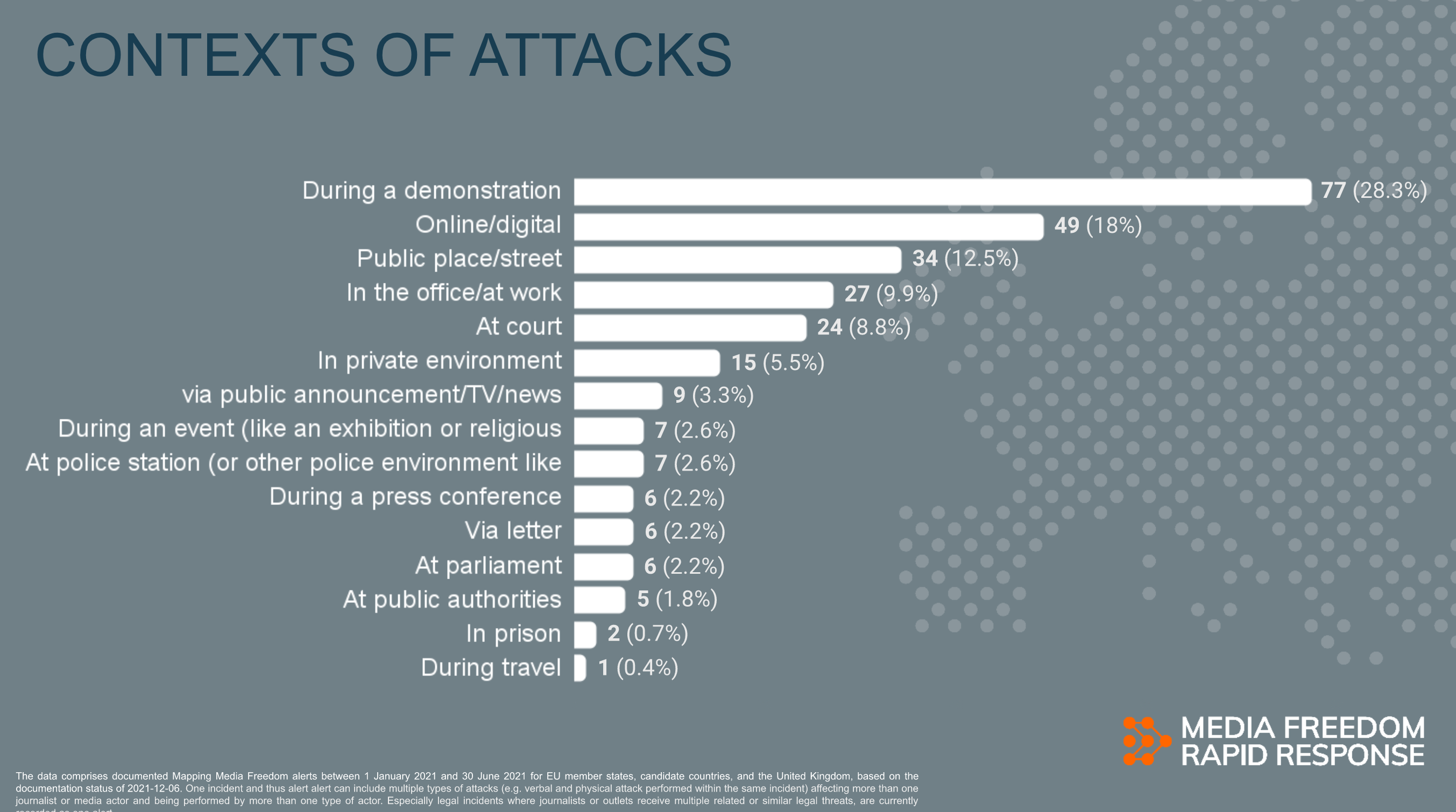 The reporting period also marks the beginning of the second year of the Covid-19 pandemic, which has exacerbated trends with a negative impact on journalists’ working conditions. While at the beginning of the crisis, access to information and sources was one of the main difficulties faced by journalists, the suspension of Freedom of Information Acts, online press conferences without proper access to public representatives, and more recently attacks by protesters have become more common. Most European states entered 2021 with more coronavirus cases than ever before and implemented severely restrictive measures, leading to protests against lockdowns and vaccination.

These often hostile demonstrations continued throughout the year and turned out to be the most common context of violations to press freedom: Although not all attacks during protests are linked to Covid-19, many incidents happened at anti-vaccination and anti-lockdown rallies. Over 26% of all alerts were related to Covid-19, from journalists insulted while covering anti-lockdown demonstrations to reporters receiving threats online for their coverage of vaccination programmes. 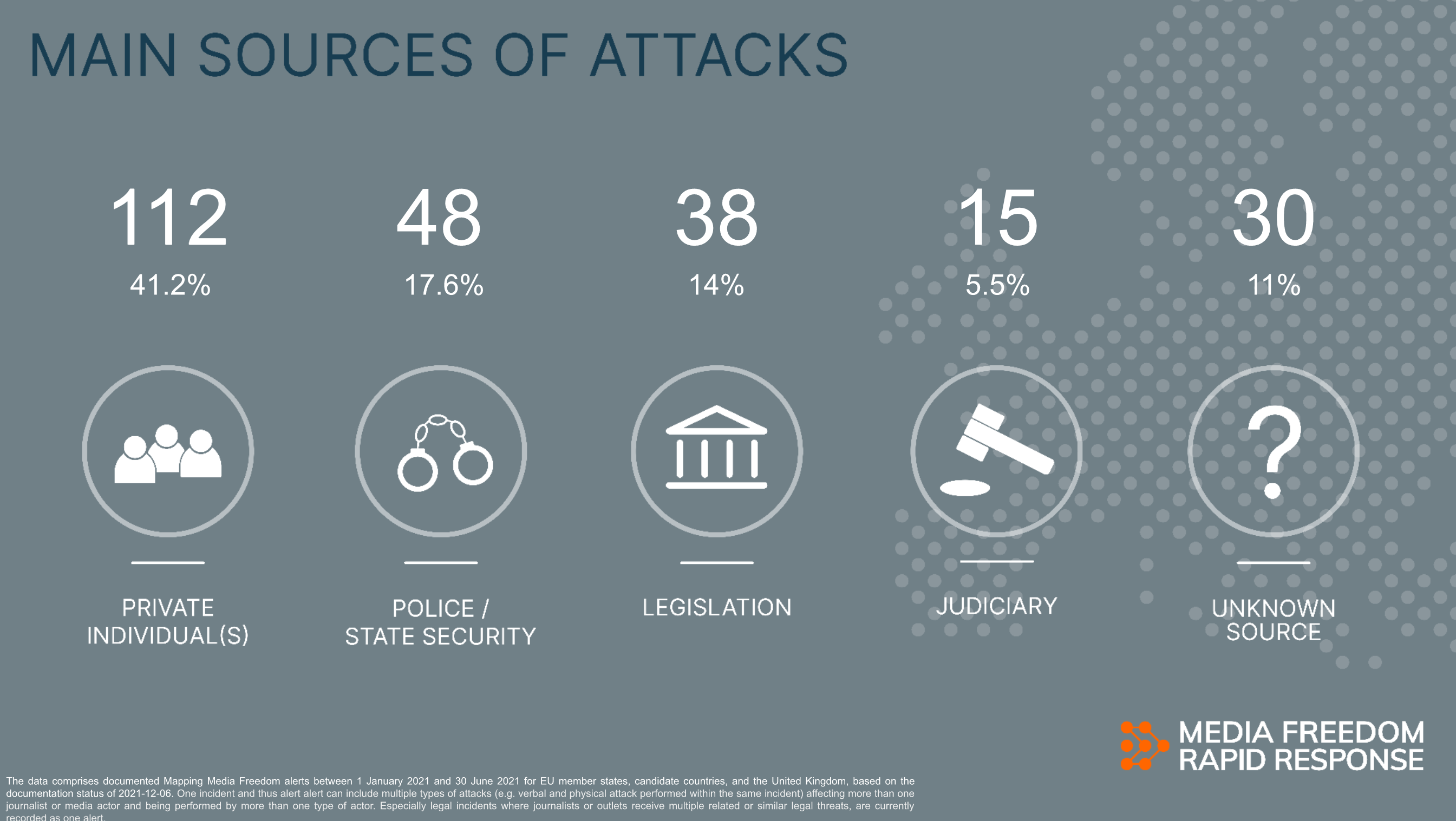 Private individuals remain the main source or perpetrators of attacks (41.2%), followed by police or state security forces (17.6%), then government/public officials (14%). Journalists have frequently become the target of protesters, who accuse them of being part of the system that they want to fight. Conspiracy theorists and far-right groups, particularly in the countries where anti-vaccine movements have been strong, have attacked, verbally abused, and harassed journalists. 55 incidents involving assaults, aggression, and intimidation against journalists linked to Covid-19 by private individuals or unknown sources, affecting 65 different journalists.

Police officers or state security forces were found to impede journalistic work or behave aggressively towards press workers in 48 incidents. In Germany, for example, 11 recorded alerts confirm that the police frequently respond inappropriately to media workers’ presence at protests. Journalists, media companies, and journalists’ unions have been raising this issue for a long time, calling for better protection and safety measures.

The report concludes, in the context of the pandemic and its repercussions, that protecting journalists from physical, psychological, and legal attacks must be a top priority during a time of social turmoil and uncertainty so they can perform their duty when they are needed the most.

The full report can be downloaded here.