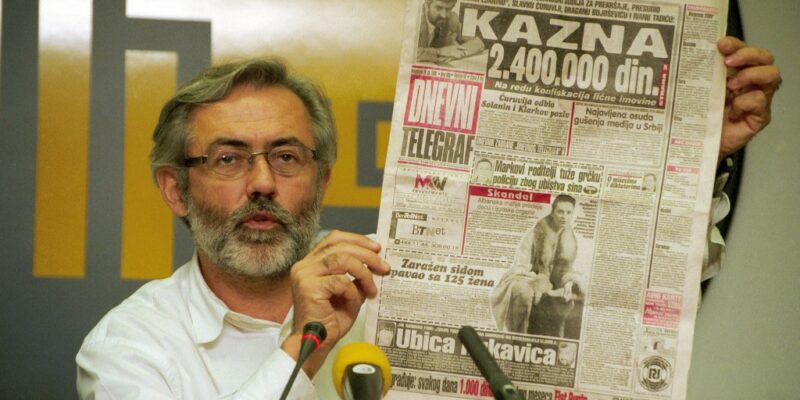 
Guilty verdicts in retrial: an important step in long fight for justice

The European Federation of Journalists (EFJ) today joined the partners of the Media Freedom Rapid Response (MFRR)  in welcoming the confirmed guilty verdicts handed down to four former officials in the Serbian state security services for the murder in 1999 of leading journalist and editor-in-chief Slavko Ćuruvija.

The decision by the Higher Court in Belgrade to reaffirm the convictions in the retrial is an important victory for the family and all those involved in the long fight for justice for his assassination and represents another important milestone in the fight against engrained impunity for the killing of journalists in Serbia, where journalists continue to face multiple threats, attacks and pressure.

Ćuruvija, an investigative reporter, owner of the Dnevni Telegraf newspaper and Evropljanin magazine, and a vocal opponent of authoritarian president Slobodan Milošević, was shot 14 times with an automatic pistol outside his house in Belgrade in April 1999. He was considered an enemy of the state for advocating in his journalism for the NATO bombing of Yugoslavia during the Kosovo War.

After a seven-year trial, four former spies working for the State Security Department were convicted for the killing and each sentenced to between 20 and 30 years in prison, in a landmark ruling in April 2019. In July last year, the Special Department for Organized Crime of the Court of Appeals overturned the first-instance verdict and ordered a retrial over the naming of an unidentified individual as the gunman, prolonging a 22-year fight for justice.

The retrial, which began in October 2020, suffered from multiple disruptions during the pandemic. However, the Trial Chamber of the Special Court finally reached its decision on 2 December 2021 and again sentenced those responsible to a total of 100 years behind bars. Former spy chiefs Radomir Marković and Milan Radonjić were sentenced to 30 years. Accomplice Ratko Romić was given 20 and Miroslav Kurak, who remains on the run, received 20 years. The verdict ruled that the Ćurvija was killed by an unidentified person.

While these renewed convictions are welcome, the fight for justice is not yet over. In the event of a further legal challenge, we hope the Court of Appeal will confirm final guilty verdicts for all four defendants. Full justice in this case will never be achieved, as the top state officials who may have ultimately ordered the killing are long gone. These renewed convictions nonetheless offer another damning indictment of the Milošević regime, which in its verdict the court found to have orchestrated the politically motivated killing through its security apparatus.

The fight against impunity for killings and attacks on journalists is an integral element of the efforts to improve media freedom in Serbia. As the MFRR stressed in our report following a recent mission to Serbia, impunity for the gravest crimes continues to cast a long shadow over the country’s climate for safety of the press. Serbia remains one of the most dangerous countries in Europe to be a journalist. In the last few weeks, our organisations have observed with concern several attacks and threats against journalists in Serbia, including a death threat against investigative outlet KRIK and the beating of photojournalist Andrija Vukelic by supporters of the ruling Serbian Progressive Party.

This verdict in the case of Slavko Ćuruvija should therefore both act as a catalyst for authorities to redouble efforts to end impunity for the other unsolved killings of journalists since the break-up of former Yugoslavia – including Milan Pantić and Dada Vujasinovic – but also to work to establish an environment in which no other journalists face attacks because of their work.

Our organisations salute the work of the special prosecutor, the Commission for the Investigation of Murders of Journalists in Serbia and the Slavko Ćuruvija Foundation, who have fought for so long to achieve justice in this case. In the event of an appeal, representatives from our organisations will seek to travel to Serbia to observe the trial in person.