Takeaways from webinar on safety of journalists 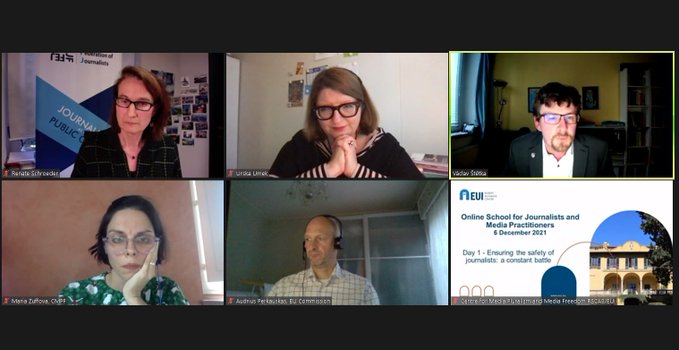 The Center for Media Pluralism and Media Freedom (CMPF) organised a webinar with the School for Journalists and Media Practitioners on the safety of journalistson 6 December 2021.

EFJ Director Renate Schroeder moderated the debate on “Ensuring the Safety of Journalists: a constant battle”, with Audrius Perkauskas, deputy head of unit “Audiovisual and Media Services Policy” at the European Commission’s Directorate-General for Communications Networks, Content and Technology (CONNECT), Urška Umek, Head of Media Unit at the Council of Europe’s Information Society Department,  Mária Žuffová, research associate at the Center for Media Pluralism and Media Freedom at the European University Institute, and Václav Štětka, Senior Lecturer in Communication and Media Studies at the School of Social Sciences and Humanities, Loughborough University (UK).

The Safety of journalists recommendations from the European Commission, published in September this year, and the need to strengthen it, by enforcing communication and harmonisation between Member States was the starting point for the contributions given by the distinguished speakers. All agreed that complacency is not an option to such unprecedented rise of attacks against the integrity of journalists and journalism.

The number of alerts registered in the CoE’s platform to promote the protection of journalists increased, particularly after the Covid-19 pandemic hit in 2020. The goal is to empower journalists to do their work, by allowing them the freedom to feel safe in the performance of their duties.

Collaboration, trust and communication between the different stakeholders are crucial tools to achieve more safety of journalists across Europe: ministries, journalists’ organisations (unions and associations), media, academics and civil society  must cooperate in full transparency. The task of ensuring the safety of journalists cannot be undertaken by one actor alone and the issue needs to be envisioned from a multi-disciplinary point of view.

Talking about the safety of journalists cannot be done without talking about the economic situation of the journalist and media outlets, said Renate Schroeder. The need to come forward with sustainable business models for public interest journalism is great.

“Journalism and information is a public good”, said Mária Žuffová, demanding governments to be more cooperative in providing much needed data on safety issues.

Václav Štětka said by referring to the project “Illiberal Turn” that the roots of hostility for journalists are found in the lack of trust in the media combined with a low level of media independence and high polarisation. Internal codes of practice tackling polarising toxic language are urgent, so is transparent financial support to independent media, he suggested among others.

Schroeder thanked all speakers for their honest, cooperative and constructive commitment to safety and to promote an enabling environment for journalists today in Europe ever more poisoned by an increasing digital polarisation, media capture and disrespect for the journalists work.

She also invited EFJ affiliates to promote the safety recommendations at national level and put pressure on governments to do their part.  Audrius Perkauskas said that the progress made in this field would not only be reflected in the upcoming Rule of Law consultation with the 27 Member States, but the Commission would make an assessment of the implementation after 18 months.