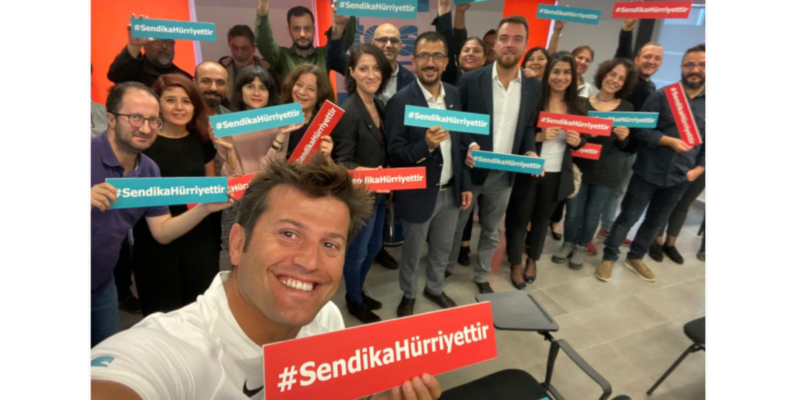 Today, the Journalists’ Union of Turkey (TGS) has reached a union victory in the Hürriyet newspaper case, where 45 journalists were dismissed in 2019 for being members of the TGS. The employer will have to pay for union compensation as well as idle time compensation. The European Federation of Journalists (EFJ) as part of the Media Freedom Rapid Response (MFRR) joined its Turkish affiliate in welcoming the court decision.

On 30 October 2019, 45 media staff members received dismissal notices from the management of Hürriyet, one of the major Turkish daily newspapers. This followed the pro-government conglomerate Demirören Group’s purchase of the newspaper a year before. Critics said this move was part of a wider media capture trend in the country.

As the laid-off employees did not receive their redundancy entitlements, they took the company to court to seek justice.

Two years ago, the European Federation of Journalists (EFJ) had joined the TGS in calling on the management of Hürriyet to respect the union rights of the employees and to negotiate with the union. 43 of the dismissed journalists were TGS members and, just before, the union had been on the verge of clinching a historic majority in the newsroom to negotiate a collective agreement. According to the TGS, Hürriyet violated Turkey’s constitution by targeting unionised journalists.

On 23 December 2021, the court ruled that Demirören dismissed 22 TGS members for “union reasons” and ordered their reinstatement. The court also ordered the Demirören Group to pay compensation. For the rest of the media workers, another case is ongoing. The TGS is expecting more good news very soon.

“This is a critical victory for the whole journalistic community of Turkey. We now demand the court to recognise our union majority status in Hürriyet daily. We are signing a collective agreement in this newspaper sooner or later,” said Mustafa Kuleli, TGS General Secretary.

The TGS had filed a lawsuit on behalf of the journalists for both reemployment, receivables and union compensation. The TGS also filed an authorisation lawsuit against the Ministry of Labour and Social Security for “usurpation of its authority”.

Ricardo Gutiérrez, EFJ General Secretary, reacted: “We welcome this court decision which confirms the unfairness of the dismissal of the journalists and media workers affiliated to TGS. Trade union freedoms must be constantly reaffirmed and defended. And employers who do not respect these freedoms and discriminate in this way must be punished. Congratulations to the TGS for its successful fight!”