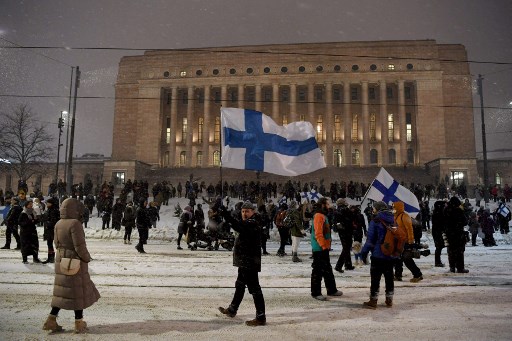 
During the first weekend of February, journalists, police officers, and MPs faced unprecedented threats and intimidation from participants taking part in the Convoy Finland protest in the capital of Helsinki. The EFJ joined its affiliate in Finland, the Finnish Union of Journalists (UJF) in condemning any forms of violence towards journalists and media workers.

While covering the event, at least five reporters and cameramen working for MTV3, Iltalehti, and Yle were threatened by some individuals in the mob in the capitol’s street. Yle’s reporter and cameraman at the scene said they were continuously verbally and physically threatened. One microphone was removed from the hands of the Iltalehti operator. Journalists were physically prevented from moving around as well as accused of “lying for the last two years”. These numerous attacks against several journalists may have been coordinated on Telegram.

The so-called “convoy” protest is a movement inspired from Canada aimed to shut down the capital with a gridlock of trucks and cars. The convoy organizers were far-right supporters and anti-vaccine protesters. They demanded the resignation of Prime Minister Sanna Marin’s government, a 50% cut in fuel prices, and the ban of all Covid restrictions.

President of the UFJ, Hanne Aho, said that physical attacks on journalists are very uncommon in Finland: “This is probably the first time that several media representatives are harassed at the same time. Two-thirds of Finnish journalists are, however, subjects of online harassment. So this time, in a way, this harassment turned physical.”