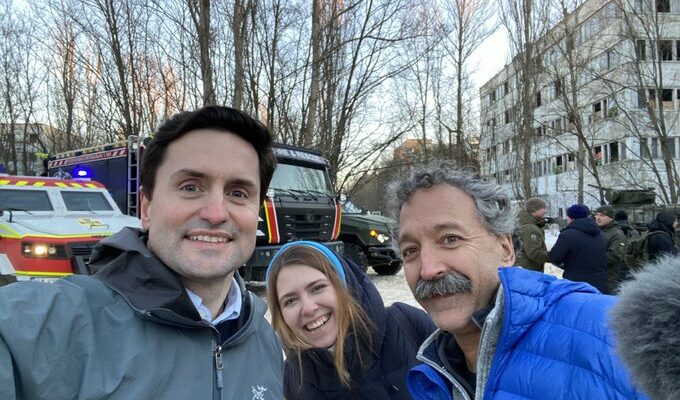 Fox News camera operator Pierre Zakrzewski and Ukrainian producer and fixer Oleksandra Kuvshynova, also known as Sasha, were killed on 14 March while reporting from Horenka, a city close to Kyiv. Fox News reporter Benjamin Hall was seriously injured in the same attack. The International and European Federations of Journalists (IFJ and EFJ) denounced the targeting of media workers reporting on the front lines in Ukraine and urged the international community to investigate these attacks.

Fox News reported that the journalists’ vehicle “was struck by incoming fire” yesterday as the crew was heading towards the city of Irpin. Only Benjamin Hall’s serious condition following the attack was initially made public.

Today CEO Suzanne Scott announced the killing of Pierre Zakrzewski: “It is with great sadness and a heavy heart that we share the news this morning regarding our beloved cameraman Pierre Zakrzewski.”

According to media reports, Zakrzewski, 55, was an Irish citizen based in London who covered many international stories for Fox News from Iraq to Afghanistan to Syria. Oleksandra Kuvshynova was a 24-year-old Ukrainian journalist. She had been working with Fox News team for a month.

Ukrainian authorities said today that Benjamin Hall was still hospitalised and had to have part of his leg amputated.

Four journalists were killed since the beginning of the conflict on 24 February. US journalist Brent Renaud was shot dead last Sunday in the suburbs of Kyiv. Ukrainian journalist Yevheniy Sakun died in the bombing of the television tower in Kiev on 1 March. At least five journalists were wounded.

EFJ General Secretary Ricardo Gutiérrez stated: “It seems clear that journalists are now being deliberately targeted. These are war crimes and perpetrators must be prosecuted as such. Tonight our thoughts are with Pierre and Oleksandra’s loved ones.”