WPFD: a message from our affiliates in Ukraine 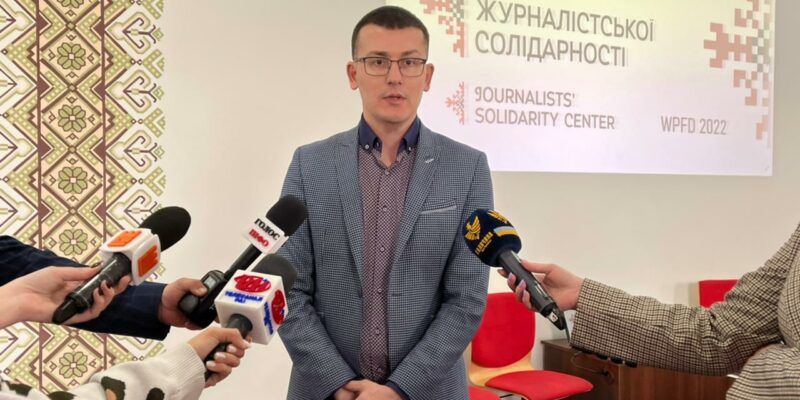 On the occasion of World Press Freedom Day, the President of the National Union of Journalists of Ukraine (NUJU), Sergiy Tomilenko, asked the EFJ to share the following message on behalf of Ukrainian journalists.

Journalists are important! It is our responsibility to support colleagues who are dedicated to their profession and who are examples of courage for us!

“We are hidden underground and we don’t want to draw attention to ourselves. I send information to the national TV station, without ever naming myself. It’s too dangerous.”

These are the words of a professional journalist from Kherson, a regional correspondent for the All-Ukrainian TV channel.

Kherson and the entire region around it have been occupied by Russia since the early days of the war. The Russians take Ukrainian journalists prisoner when they intercept them. This was the case with Oleg Baturin, who was held captive for eight days without contact with his family and without access to his medication. Their homes are searched and their laptops and phones are confiscated. When the occupiers did not find journalist Konstantin Ryzhenko in his flat, they arrested his younger brother. Most of the journalists do not live in their own houses: they hide in the houses of their acquaintances. They can’t leave the region. The other day, a journalist informed us that she had passed through 45 Russian checkpoints with her family on the way to Ukrainian-controlled territory, but in the end they could not get out!
There are hundreds of Ukrainian journalists in the occupied territories.

Thousands of media workers have been evacuated, either by moving with their families to safer places inside Ukraine or by fleeing abroad as refugees.

Thousands of journalists are losing their jobs. And their livelihoods.

Millions of Ukrainians risk losing access to professionally responsible journalism. Above all, they are denied access to local journalism.

We feel that the war has wiped out the peaceful future of journalists and media.
But we are talking about direct loss of life, the killings caused by Russia.

Today, according to NUJU, 23 media workers have died. These are journalists from Ukrainian and international media, media workers, civilian victims of the bombing, but also media workers who joined the army to defend Ukraine as soldiers.

Of course, journalists should not associate their profession with military affairs. But the journalistic community should honour the memory of every dead media worker. After all, the cause of death is unique: the Russian war is to blame.

In the temporarily occupied territories, after the tanks and bayonets, a campaign to pressure journalists and clean up the information space is immediately launched. The occupiers offer journalists to become local propagandists or demand silence from them.

A scandalous example of this pressure is the case of Melitopol: after a search of the flat of the editor-in-chief of the local online media Ria-Melitopol, Svetlana Zalizetskaya, the Russians took her 75-year-old father hostage. An elderly man was thrown into the basement, the Russians called his daughter and offered to exchange the father for the daughter.

This is real fascism!

But it is fascism, which has progressed with the direct support of Russian propagandists.
Ukrainian journalists are convinced that if the majority of Russian media workers, from Moscow to the provincial cities, were really against incitement to hatred, then the war would not have started!

Some representatives of the Russian liberal media should also be supported. It is the right of the institutions of the Western world to support them. But these efforts must be fundamentally separate initiatives, focused on media workers in a country that is an aggressor in this war. Not at any cost to lump Russians and Ukrainian journalists together in common programmes.

How can the civilised world support Ukrainian journalists and media?

But the main expectation of Ukrainians and Ukrainian journalists from foreign media is to do everything possible to stop the war! To inform European and Western politicians. To stop the genocide of Ukrainians.

Today I am the VOICE of my colleague from occupied Kherson. I am the voice of a journalist who is hiding to save her life and her freedom. But who so much hopes for solidarity and effective help…

President of the National Union of Journalists of Ukraine,

Member of the EFJ Steering Committee