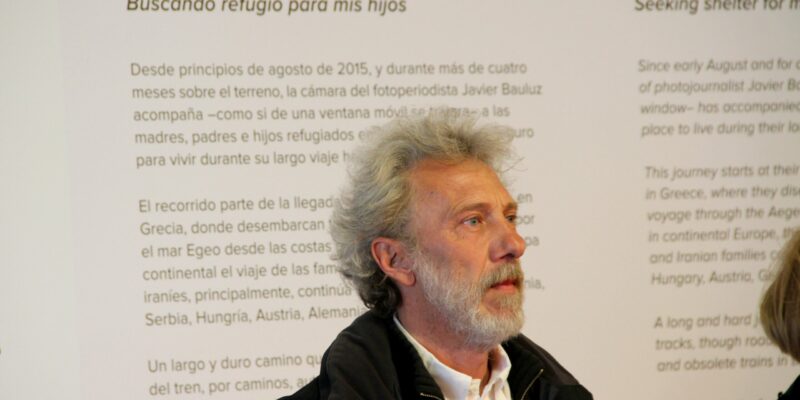 
The European Federation of Journalists (EFJ) as part of the Media Freedom Rapid Response (MFRR) coalition today expressed serious concern over the recent €1,000 fine issued to Pulitzer prize-winning photographer Javier Bauluz under Spain’s controversial ‘Gag Law’. The fine represents another example of the need for the Spanish government to urgently reform the most problematic elements of the law in line with international human rights standards to protect freedom of expression and the freedom of the press.

In November 2020, the photographer had been documenting the arrival of thousands of refugees and migrants to Gran Canaria. As he attempted to take photographs of the arrival of a rescue boat at the port in Arguineguín, he was approached by two police officers. Video footage appears to show one of the officers grabbing him by the arm and demanding he leaves the public area. After Bauluz protested, the police issued him with two fines for ‘disrespecting an agent’ and ‘refusing to identify himself’.

Manifesto promise but no reform

More than a year and a half later, Bauluz finally received a €960 fine for the two charges under Article 36.6 and Article 37.4 of Spain’s Ley Mordaza or Law on the Protection of Citizens’ Safety – dubbed the ‘Gag Law’. Bauluz rejected the fines and said that police had limited press access to the arrival centre, unjustifiably limiting the ability of the press to properly document the situation which had been criticised for unacceptable conditions. There is no option to appeal the administrative sanctions.

Bauluz is one of many journalists, photographers and activists in Spain who have been fined under the 2015 Gag Law for alleged behaviours that endanger the work of law enforcement authorities. Among other rules, the legislation allows authorities to fine journalists and media organisations for distributing unauthorised images of police. Media freedom groups and human rights organisations have repeatedly criticised the law for violating freedom of expression and leading to arbitrary sanctions against journalists and media workers like Bauluz.

In December 2020, the Spanish Parliament started a long-awaited discussion over the reform of the law. However, unfortunately this has not led to any tangible results so far, despite being one of the promises in the manifesto of the current government. The Council of Europe’s Human Rights Commissioner Dunja Mijatovic has expressed her concern over the text of the suggested bill, which she considers insufficient to fully comply with Spain’s human rights obligations. In January 2021, the Constitutional Court validated the law’s compliance with constitutional principles, except for the provision referring to prohibition of unauthorised recording of law enforcement operations.

In the wake of the fine issued against Bauluz, MFRR partners again urge the Spanish government to push forward and undertake a comprehensive reform of the Ley Mordaza in line with international human rights standards. Our organisations also call for the fine against Bauluz to be immediately withdrawn. It is vital that all barriers that hamper the ability of journalists and photojournalists to carry out public interest work and document potential rights abuses are removed. Until this legislation is reformed, press freedom in Spain will continue to suffer.