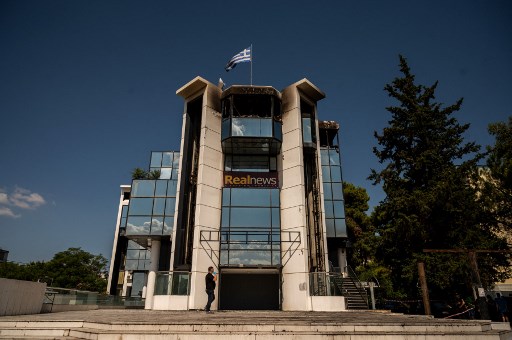 
The European Federation of Journalists (EFJ) today joined its partner organisations of the Media Freedom Rapid Response (MFRR) and the Journalists’ Union of Athens Daily Newspapers (JUADN) in condemning the arson attack on the offices of newspaper Real News and the radio station Real FM in Athens on 13 July 2022.

Our organisations call on the Greek law enforcement authorities to conduct a swift and thorough investigation into the motive and circumstances behind the fire and to bring the perpetrators and masterminds to justice. This case is yet another worrying example of the deteriorating press freedom in Greece, which requires immediate attention from state authorities.

On 13 July 2022, at 3:30am, at least four gas canisters exploded in the exterior stairwell of the offices of the Real Group headquarters in the Maroussi district of the capital. Three of the canisters had been taped together and placed with flammable liquid in the stairwell between the ground and first floors, while a fourth had been placed under the stairwell, according to reports.

Following the explosion, a fire broke out and damaged a large part of the building while employees working inside had to be evacuated. No major injuries were reported but a number of people were taken to hospital with respiratory problems. Photos and videos of large flames were shared on social media showing the extent of the fire, which was brought under control after 18 firefighters battled the blaze for two hours, according to media reports.

According to Real Group, surveillance cameras captured two masked individuals who were present at the scene shortly before the explosion. The authorities have not ruled out the possibility that a support group helped them and waited for the perpetrators at some distance from the building.

The Journalists’ union JUADN condemned the attack on press freedom and called for a transparent investigation: “When the media is set on fire, when the state cannot solve crimes against journalists and the media and bring perpetrators to justice, when groups aiming to intimidate, silence or control the media act without restraint, democracy is at risk.”

The situation of press freedom in Greece is of increasing concern to the MFRR organisations, which carried out a fact-finding mission last year amidst a deteriorating climate for free and independent journalism. Today, the European Commission echoed these significant concerns in its 2022 Rule of Law report on Greece and recommended that Greece “establish legislative and other safeguards to improve the physical safety and working environment of journalists”.

The quick condemnation of the attack by government officials, including Prime Minister Kyriakos Mitsotakis, is welcome and sends a clear signal that such intimidation will not be tolerated. However, this latest attack underscores the urgent need for the Greek government to effectively and swiftly implement the recently signed memorandum aimed at strengthening the protection and safety of journalists.

More widely, the lack of any tangible progress in bringing the killers of veteran Greek crime reporter Giorgos Karaivaz to justice only emboldens those aiming to silence the press and encourages similar attacks. Identifying and prosecuting those behind this arson attack, and ending impunity for other cases of violence, will be vital in the coming months for improving the landscape for media freedom in Greece.