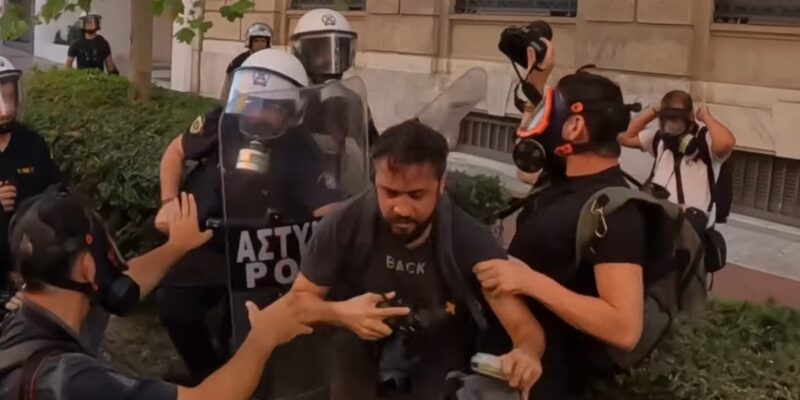 The European Federation of Journalists (EFJ) condemns the police brutality against several journalists in Athens, Greece, on 28 July, during the demonstration in solidarity with jailed anarchist Yiannis Michailidis. The EFJ calls on the Greek judicial authorities to condemn the perpetrators of such violence.

Officers of the primary riot police unit of the Hellenic Police (MAT) physically attacked and teargassed several journalists and covering a protest in central Athens on 28 July. Among the victims identified were the journalists Eleftheria Komandou (Golden Dawn Watch), Lefteris Partsalis and Manos Fragioudakis (News 24/7).

The Journalists’ Union of Athens Daily Newspapers (JUADN), an EFJ affiliate, denouncedin a statement the attack against Komandou, calling it a provocation.

An investigation into the actions of police was launched by The Hellenic Police Headquarters on July 29, and police officers involved in the disciplinary offenses against media professionals and protesters were removed from their duties until the investigation is completed.

“Together with our Greek colleagues, we strongly condemn this police violence, which violates the right of Greek citizens to access information,” said the EFJ President Maja Sever.

“The watch-dog role of journalists is of crucial importance during protests and demonstrations. Their presence is a
guarantee that the authorities can be held to account for their conduct, including the methods used to control or disperse protesters. Any attempt to remove journalists from the scene of demonstrations must therefore be subject to strict scrutiny. We consider the behaviour of the Athens riot police to be an act of censorship”, said EFJ General Secretary Ricardo Gutiérrez.

The EFJ calls for the conviction of the police officers involved and for the Greek authorities to implement the EU Recommendation on the protection of journalists without delay.